The Great North Run Foundation has been awarded a National Lottery Heritage Fund grant of £250,000 to create a feature length documentary celebrating 40 years of the UK's biggest running event – the Great North Run.

The film, which will be released to coincide with the event's 40th staging in 2020, will focus on the social history of the North East over the last four decades and the changes the event has witnessed since it was first held.

Just 12,000 runners took on the first ever Great North Run on the 28th June 1981. Founded by North East Olympian, Brendan Foster, and a small group of friends, they had no idea what the event would eventually come to be.

Now the world's biggest Half Marathon, 57,000 people of all ages and abilities sign up every year to take on the 13.1 mile challenge from Newcastle to South Shields on the North East coast.

The documentary will tell the story of the event through the voices of the people that have made the Great North Run great. As well as the runners, volunteers and local spectators that support them along the way, the project will feature; the bands that play along the route, the small charities that wouldn't exist without funds raised, the Scout group that gives out the water bottles, the first aiders that provide comfort and care and many, many more.

These oral histories will be woven together with meticulously researched archive material sourced from the BBC, the North East Film Archive and through the National Lottery Heritage Fund project, ‘Search and Rescue', which aims to find the hidden footage – often family films tucked away in cupboards and attics.

Brendan explains: “When we first started out, we could never have imagined where this journey would take us. 40 years is a very special milestone and we can't wait to celebrate with our runners, incredible volunteers, first rate spectators and the rest of the region. 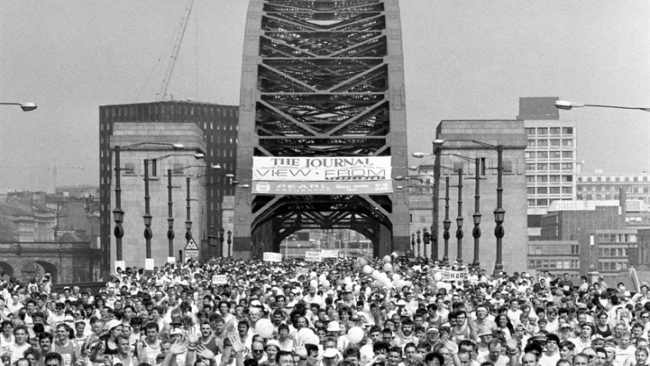 “We know so many people have brilliant memories of the event. Wherever I go, people stop me to tell me about their own Great North Run experiences and what it means to them.

“We want to create a record of the impact of the race on people's lives, and explore the heritage of the race in the context of the changing social, cultural and industrial landscape of the region.

“It will be a privilege to capture some of these memories forever in this film and share them with the next generation.”

David Renwick, Director, England: North, The National Lottery Heritage Fund, said: “The UK is a nation of sports lovers and the Great North Run is an integral part of our sporting heritage. As we celebrate the 25th birthday of the National Lottery this year, we are delighted that we are able to help the Great North Run celebrate their big 4-0. The money raised by National Lottery players, some of whom may be runners themselves, will go towards creating this wonderful film to showcase the importance of the Run for the last 40 years, and ensure its legacy will live on for even longer.”

The stories gathered throughout the project will be enhanced by a specially commissioned script from the one of the region's most famous authors, and Great North Run veteran, Horrible Histories creator, Terry Deary.

The film will be broadcast nationally in 2020, presented at regional cinemas and heritage venues in the North East and distributed via regional and community screenings, alongside a children and young people's engagement programme.

The producers of the documentary are still looking for contributors for this project and want to hear from anyone with a good story to tell. They are also on the lookout for personal photos or video footage from the race. If you want to get involved get in touch at GNR40@greatrun.org .