The 10-time World and Olympic champion and British marathon record holder defends his title in the famous half marathon between Newcastle and South Shields on Sunday.

The 37-year-old has finished first on every occasion since 2014 and will once again use Simplyhealth Great North Run as preparation for the Chicago Marathon.

Lining up alongside Sir Mo will be fellow Great Britain marathoner Callum Hawkins. The Scottish distance runner will be in marathon action at the World Championships in Doha later this year, hoping to improve on the fourth place he achieved in London in 2017.

The 27-year-old previously competed in the Great North Run four years ago, finishing second Briton to Farah in the world’s biggest half marathon.

Ethiopian Tamarit Tola will look to upset the British contingent’s hopes on Sunday. The 28-year-old has a half marathon PB of 59.37 in comparison to Farah’s best of 59.22 and the 10,000m 2016 Olympic bronze medallist will be one to watch on Tyneside.

Bashir Abdi, who finished third in last year’s Simplyhealth Great North Run, will also be involved in 2019. The Belgian athlete is a training partner of Farah’s, and is expected to be challenging at the front of the pack once more on Sunday.

Domestic hopes, Farah and Hawkins aside, rest on the shoulders of Derek Hawkins, older brother of Callum, who has endured an injury-hit three years since representing Team GB at the Olympic marathon in Rio in 2016. Daniel Studley, Nick McCormick, Mohamed Mohamed, Adam Clark and Alex Bampton. 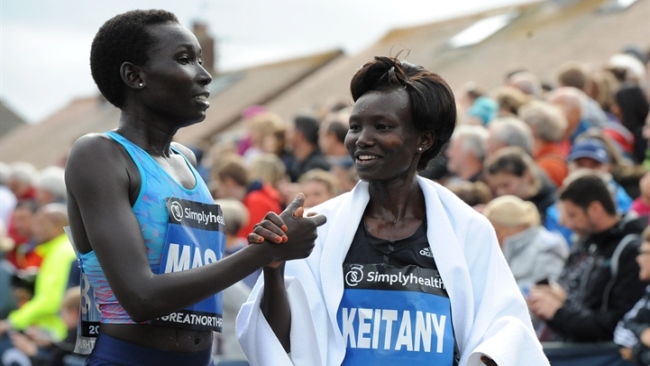 In the women’s race, Mary Keitany will bid to win her fourth Great North Run since 2014 when she lines up on Sunday. The Kenyan took first place in 2014, 2015 and 2017 and will be favourite to repeat her victory.

Magdalene Masai last competed at Simplyhealth Great North Run in 2017 when she finished fourth. The Kenyan will be expected to push Keitany and Kosgei to complete a Kenyan 1-2-3.

British pair Charlotte Purdue and Steph Twell will count on the home support in the half marathon. The Aldershot, Farnham and District duo are in decent form at present, but will be challenged by Hayley Carruthers in what will be a fierce battle for domestic honours.

In the wheelchair races, David Weir and Martyna Snopek both seek to replicate their 2018 wins on Tyneside. Both members of Weir’s Weir Archer Academy, the pair eased to victory in their respective classes last year but both will find competition in the shape of Simon Lawson and Johnboy Smith in the men’s race, while perennial challenger Shelly Woods will take on Snopek in the women’s race.