Marvin Rees, the Mayor of Bristol, is to take part in the Simplyhealth Great Bristol 10k, acting as a guide for a blind runner who helped set up a running community in the city for those with visual impairments.

This is the first time that Marvin has signed up to the 10k event, which takes place in the city on Sunday 13 May.

He is set to guide Chris Blackabee, from Hereford, who helped set up VI Runners Bristol, a group that supports visually impaired runners.

Chris set up the group with running friend Colin Johnson, from Bradley Stoke, who he met after Colin became his guide for his very first marathon.

After an approach from the group, Marvin, who has served as Mayor of Bristol since 2016, decided to take part with the group as a guide in the 10k.

Around 6 visually impaired runners along with their guides from the running group will join the Mayor and Chris at the event this spring.

Marvin said: “I’m a great believer that sport should be inclusive and activity where everyone can benefit from the positive physical and mental impacts.

“I am delighted Chris reached out to ask me to be involved and support his call for more blind and visually impaired people to pull on their running shoes and take up the sport.

“His is an inspirational story of determination and achievement and I fully support his aim of encouraging others to get involved. I look forward to lining up at the start line alongside Chris and other blind and visually impaired runners.”

Chris started running ten years ago but in 2016 he searched for a guide to run with him in a marathon as part of his next challenge and has since gone on to complete 5 others including London and New York.

After Colin answered his call, the two decided to set up a running community group in Bristol to inspire others to take up running.

During the past year, VI Runners Bristol has grown to over 100 members, with the group aiming to boost mental wellbeing, build confidence and widen a person’s social network of friends through running together.

Chris, 49, said: “Many blind and visually impaired people can often become isolated, suffer from low self-esteem and lack of confidence and this is something I am determined to change.

“I’ve always had a visual impairment since I was born. I had a small amount of sight when I was younger but then by my late teens, it was completely gone.

“I took up running around 10 years ago by tackling short distances and gradually improved both my physical and mental health. However, since becoming a student and now an employee at The Royal National College for the Blind in Hereford I have had access to specialist equipment and expertise to develop my stamina and technique.

“Running has completely changed my whole attitude towards life and physical exercise, I’ve met amazing friends and achieved goals that I could have only ever dreamed of before.

“Colin was my guide at the Budapest Marathon and from then, we decided to set up a group in Bristol where we could help blind runners train with guides in the area.

“The value of running is far more beneficial than the obvious physical improvements as it can help to make a dramatic change to a person’s life by building their self-confidence and widening their social network.

“It’s brilliant that someone like the Mayor of Bristol is so supportive of the group as we want to inspire other people with visual impairments to come and give walking and running a go.” 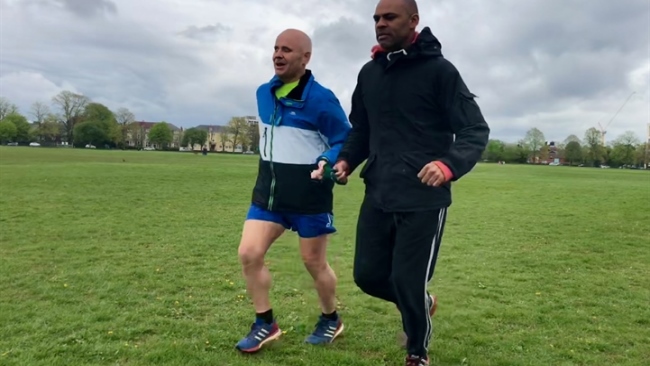 The Simplyhealth Great Bristol 10k features 13,000 runners who will be taking on a 10k challenge this May, across a course that makes the most of the city’s picturesque backdrop.

Runners start on Anchor Road and pass by the Bristol’s awe-inspiring surroundings such as the Clifton Suspension Bridge and Spike Island, before crossing the finish line near to Millennium Square.

The group hopes that their attendance at the event in large numbers will inspire others to take part in running, whether they are visually impaired, fully sighted or wish to become a guide.

Colin added: “People like Chris are an inspiration to me with such positive attitudes to life.

“Playing a part in helping him achieve his marathon goal made me see that I wanted to help others achieve their own personal milestones too. It made me realise that running can give you a lot more than just fitness.

“By setting up a running group in Bristol we hope that we can achieve the same for many more people in the area.”

To find out more about us visit the VI Runners Bristol Facebook page.