An epic weekend of sport is approaching for the North East as the region gears up for the 39th staging of the world famous Simplyhealth Great North Run on Sunday 8 September.

57,000 people are registered for the iconic 13.1 mile run which starts on the Central Motorway in Newcastle before making its way through Gateshead, finally finishing at the coast in South Shields.

The Simplyhealth Junior Mini Great North Run, will see 8,500 budding runners aged from 3 to 16 take on the 1.5k Mini course or the longer 4K Junior run on the Newcastle Gateshead Quayside. This year the 150,000th runner will cross the finish line of the event which was first staged in 1986.

1000 runners will be taking part in the 5k, including 200 staff from the Newcastle Upon Tyne NHS Trust as part of a campaign designed to support the physical and mental well-being of their employees.

In the south of the region, the second year of the Simplyhealth Great Tees 10K and Junior Mini events will be accompanied by the first ever staging of the Great North CityGames in Stockton-on-Tees. The unmissable event, showcasing local, national and international talent will see the town's famous High Street transformed into a pop up athletics arena which will include a purpose built Sprint Track, Long Jump and Pole vault.

Allyson Felix will lead a list of star names to compete in the Great North CityGames which moves to Stockton-on-Tees this year.

The 33-year-old Californian will take on the 150m, starting as favourite having earned the accolade as the joint most decorated female in Olympic history.

Felix will be joined by a host of stars including Paralympians Jonnie Peacock, Sophie Hahn and Marlou van Rhijn in the free-to-spectate event.

Sprinter Richard Kilty will compete over 100m and 150m, with the Teesside Tornado competing in front of his hometown crowd.

SPORTING SUPERSTARS ON THE STARTERS' PODIUM

Cricketing hero Mark Wood, from our World Cup winning England side will join Lionesses Steph Houghton and Jill Scott, who reached the semi-finals at the Women's Football World Cup in France, on the official starters podium at Sunday's Simplyhealth Great North Run.

The trio of talent, all originally hailing from the North East will take on starters' duties for the day, seeing tens of thousands of runners across the start line. 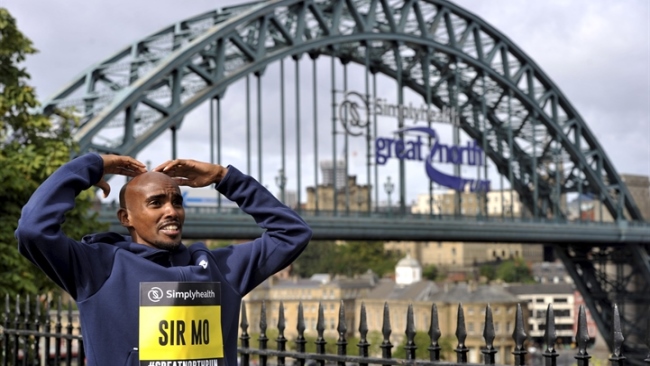 Ahead of the masses Sir Mo Farah will lead a world class elite field in a competitive race across the half marathon distance. Farah will look to become the first ever athlete to win six consecutive Great North Runs. The 10-time World and Olympic champion and British marathon record holder defends his title having finished first on every occasion since 2014.

Lining up alongside Sir Mo will be fellow Great Britain marathoner Callum Hawkins. The Scottish distance runner will be in marathon action at the World Championships in Doha later this year, hoping to improve on the fourth place he achieved in London in 2017.

Ethiopian Tamarit Tola will look to upset the British contingent's hopes on Sunday. The 28-year-old has a half marathon PB of 59.37 in comparison to Farah's best of 59.22 and the 10,000m 2016 Olympic bronze medallist will be one to watch on Tyneside.

In the women's race, Mary Keitany will bid to win her fourth Great North Run since 2014 when she lines up on Sunday. The Kenyan took first place in 2014, 2015 and 2017 and will be favourite to repeat her victory.

Magdalene Masai last competed at Simplyhealth Great North Run in 2017 when she finished fourth. The Kenyan will be expected to push Keitany and Kosgei to complete a Kenyan 1-2-3.

British pair Charlotte Purdue and Steph Twell will count on the home support in the half marathon. The Aldershot, Farnham and District duo are in decent form at present, but will be challenged by Hayley Carruthers in what will be a fierce battle for domestic honours.

In the wheelchair races, David Weir and Martyna Snopek both seek to replicate their 2018 wins on Tyneside. Both members of Weir's Weir Archer Academy, the pair eased to victory in their respective classes last year but both will find competition in the shape of Simon Lawson and Johnboy Smith in the men's race, while perennial challenger Shelly Woods will take on Snopek in the women's race. 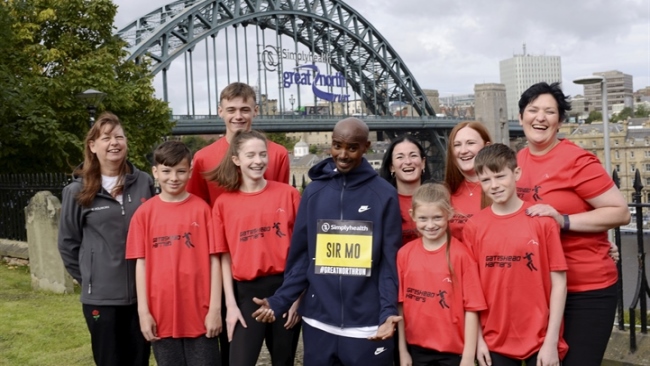 The 40th Great North Run will take place in 2020, and GNR40 will be our boldest event yet, with a whole host of exciting new activities and experiences for runners, spectators and visitors planned. We'll be making our first announcement in the New Year about what to expect from this exiting milestone event.

Our partnership with Made By Sport will play a big part in next year's celebrations.
In June we were announced as a founding partner of this national campaign, which was launched by HRH Duke of Sussex, Anthony Joshua and Nicola Adams

It aims to champion the power sport has to change lives and raise £40m in additional funds for organisations that are using sport to transform the lives of young people in the UK over the next four years.

Made By Sport is aiming to raise a significant amount towards this total through its partnership with GNR40, that money will stay in the North East region to support local organisations.

This year the event is highlighting the work of some of these amazing organisations and the extraordinary people that give up their time and energy to sustain them, in order to motivate runners to support the campaign in 2020.

“On Saturday come and join us at our ‘Rate my Gait' dome – run for 20 seconds on our treadmill and you'll leave with your own unique video and tips on how to improve your running form – we'll be next to The Baltic Centre.  On Sunday Rate My Gait will be next to the beer tent in the finishers village for everyone to enjoy.  We'll also be helping runners with their post run recovery at our Stretch Zone and Massage Zone.

“This year, we're proud to have Diabetes UK as our official charity partner for the series.  Our partnership enables us to continue our great work in supporting people with their health; encouraging as many people as possible to become more active to reduce the risks of developing conditions such as diabetes. Good luck to everyone taking part. We look forward to seeing you at the finish line to celebrate your amazing achievements.”

The Simplyhealth Great North Run is the UK's biggest running event and the world's biggest half marathon. The event will be broadcast live on BBC One from 09.30 to 13.30 on Sunday, 8 September with highlights on BBC Two at 5pm.

The reminder service for GNR40 will be open from 10am on Sunday 8 September and the general ballot will open on Monday 6 January 2020.