Entries for the Great South Run are open: Greatrun.org/South

A woman who lost her sister to cervical cancer will take on the Great South Run with her brother-in-law to raise awareness about the disease that claimed her life at just 42 years-old.

Mum-of-one Angela Tugwell, from Gosport, lost her short and brave battle with cervical cancer in 2013 after a scan revealed that it had already spread to her lymph nodes.

Tragically, Angela was diagnosed with a rare form of cancer called adenocarcinoma, something that is unlikely to show up on a smear test, which had always come back clear for her.

She left behind her husband Ted, her nine-year-old daughter Emma and her older sister Julie Hibbert, 46, who were left devastated by her death.

Julie and Ted were then inspired to set up a tribute fund to Angela, which has since raised over £94,000.

The pair will also run the Great South Run, the world’s leading 10-mile event, with a team of thirty others to support Jo’s Cervical Cancer Trust, a charity that Angela sought advice from.

Julie, who lives in Fareham, said: “Fundraising has kept us busy and helped us to cope with our loss.

“Angela was my younger sister by 15 months, we were always close and as well as being sisters we were best friends.

“After Angela had her first child Emma, she waited a few years and then decided she would like to add to her family.

When Angela fell pregnant again she could not have been happier, but after 7 weeks she lost her baby. She went to on have further miscarriages but in May 2013 doctors found a tumour on her cervix.

“She was diagnosed with a rare form of cervical cancer. She responded well to treatment but developed a lot of blood clots as a side effect. Angela passed away in her sleep later that year.

“Ted and myself decided to set up a fund as tribute to Angela, and this led to us raising money in various ways which is why we decided to sign up for the Great South Run.

“Ted and I always train together for the Great South Run and I think Angela would love that.” 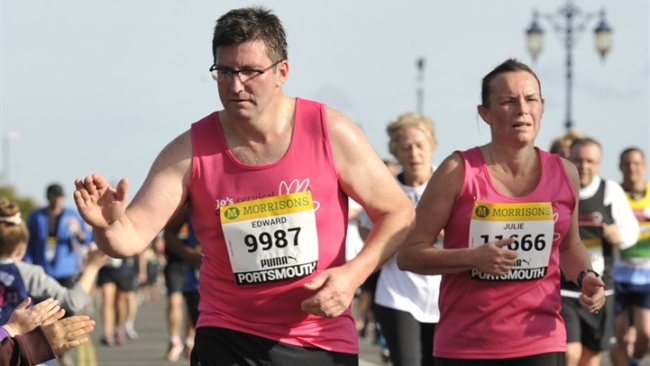 Angela was treated with radiotherapy and chemotherapy sessions at the Queen Alexandra Hospital in Portsmouth before being transferred to Southampton General Hospital.

During this time, she relied on the Jo’s Cervical Cancer Trust charity, an organization that encourages others to speak about their diagnosis with other sufferers.

Heartbroken Julie and Ted have thrown themselves into fundraising for the charity in the hope that they can help to stop other families going through what they went through.

This year will be the third Great South Run that Ted and Julie have took part in and they aim to hit their goal of £100,000.

Julie added: “Soon after Angela’s passing, we wanted to set up something where people could leave their messages of condolence and to donate a little bit of money in my sister’s memory.

“This then turned into a series of fundraising events, we thought doing this would have been exactly what Angela would have wanted.

It has been a great help to Ted and myself that we can help Jo’s Cervical Cancer Trust increase awareness of this horrendous disease in Angela’s memory.

“We have organized many charity events for the trust but the Great South Run is our main one.

“I know Angela would be so proud that me and Ted are running together and to support other people who are going through what she did. “

The fast and flat course of the Great South Run takes you through the iconic sights of Southsea and Portsmouth, including the Portsmouth Historic Dockyard, home of HMS Victory, past Spinnaker Tower, and finishes on the seafront with beautiful views of the Isle of Wight.