Entries for the Simplyhealth Great North 10k and Family Run are open at Greatrun.org/North10k

North East athlete Alyson Dixon joined a group of runners from across the region to launch the Simplyhealth Great North 10k Gateshead, which is celebrating it's 10th anniversary this year.

2018 will see the 10th staging of the the North East's biggest 10k running event when it returns on Sunday 8 July.

Aly, who is fresh from Australia's Gold Coast where she finished sixth in the Commonwealth Games marathon, formed part of a group of people who gathered in Gateshead International Stadium to share their own memories of the event over the last ten years.

The Sunderland Stroller has close connections with the Simplyhealth Great North 10k, coming second in 2014. Her father Dave is also a regular volunteer at the event.

She said: “I've taken part in the Simplyhealth Great North 10k before when it's fit in with my training, it's pretty close to home and is a good fast run.

“I have always enjoyed the course when I have taken part. It's also a tough one because you have two little hills on the course.

“It's amazing to have another big run on our doorstep and it keeps the North East on the map, which is fantastic.” 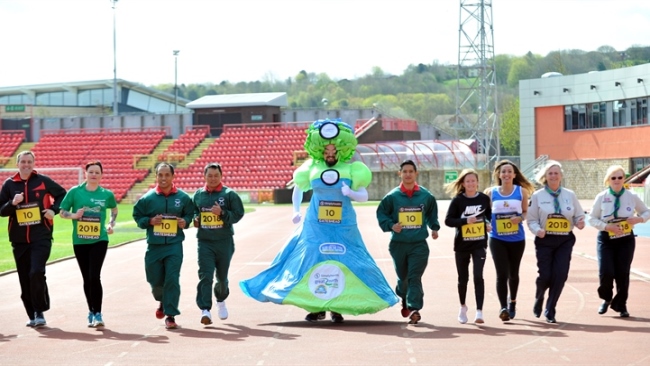 Rugby player Colin started fundraising in 2014 for Breast Cancer Now by taking on running events in his striking, handmade pink dress in memory of a friend who had passed away.

Four years on and tens of thousands of pounds later, the Simplyhealth Great North 10k has become a major part of his yearly runs.

Colin is commemorating the event's anniversary by creating a special 10-year-themed dress that will be designed by school children from his hometown.

He said: “The Simplyhealth Great North 10k is very special to me as it's an event I took part in during my very first year of fundraising.

“It's one of my home events and the atmosphere is always incredible. I always high five the runners and spectators on the out and back section along the Quayside and everyone is so supportive, from crossing the start line to finishing in the stadium.

“It's an amazing atmosphere and a great day out for the family that I look forward to every year.

“Four years later, the Big Pink Dress is still going strong and I thought it would be a nice way to mark 10 years of the event by asking school children to enter a competition to design a commemorative dress.

“Myself and three other judges will pick the winning design and I'll be wearing it in style at the event this year.”

Rachael White, from Westerhope in Newcastle, is taking part in the Simplyhealth Great North 10k for the first time this year, to mark 10 years since the passing of her fiancée Andrew.

Andrew tragically died at just 26-years-old after being diagnosed with small round cell sarcoma.

10 years on, Rachael will lead a team of runners to fundraise for the Charlie Bear for Cancer Care, the dedicated charitable fund for the Northern Centre for Cancer Care (NCCC) at Newcastle's Freeman Hospital.

Rachael, 33 , said: “Andrew battled cancer for three years and close to the end, he made me promise that I would make the most of life.

“With his anniversary coming up, a group of us decided to take on a year of challenges in his memory, raising money for a local cancer fund.

“There'll be seven of us taking part in the challenges and the Simplyhealth Great North Run. We chose the Charlie Bear for Cancer Care fund because it's where a lot of the staff who treated Andrew are now based and his consultant is now a co-chair for the fund.”

Every year, 5,000 people share the satisfaction of completing a 10k challenge at the Simplyhealth Great North 10k as they take in the iconic sights of the NewcastleGateshead Quayside.

They then receive hero's welcome as they enter Gateshead International Stadium where family and friends gather to cheer them on as they experience a unique finish line feeling.

For six years, 200 Gurkha soldiers have made the journey to Gateshead from Catterick Garrison in North Yorkshire to run the event as part of their training.

The Gurkhas are a firm favourite at the 10k and the event is a key part of their fitness training and introduces them to the UK as part of their cultural orienteering programme.

2018 also marks a new partnership between the Simplyhealth Great North 10k and Newcastle College, where students and staff are encouraged to take part in the 10k as part of one mass team.

The event also includes the Simplyhealth Great North Family Run, which returns for the third year and features a shorter mile-long running route for children and their families, starting and finishing on the stadium track.

Kerry Simpson, Communications Manager at the Great Run Company, said: “Since its first staging in 2009, the Simplyhealth Great North 10k has grown into one of the most popular events for runners of all abilities in the North East.

“Every year, 5,000 people make it a must-do event in their running calendar. It's also the sister event to the Simplyhealth Great North Run and is the perfect training run for the big one in September.

“We can't wait to welcome everyone to Gateshead International Stadium who are all taking part for a variety of different reasons.”

Chris Strong, Service Manager for Sport and Leisure at Gateshead Council, said: “Gateshead has a long established reputation for hosting major sporting events and we are delighted to be able to celebrate the 10th anniversary of the Simplyhealth Great North 10k this year.

“The event serves as a great inspiration for anyone thinking of getting active as a way of improving their health and wellbeing, no matter what their age or ability.

“This is an amazing and picturesque route which will see competitors taking in some of Gateshead's most iconic sights along the way.”

Entries for the Simplyhealth Great North 10k and Family Run are open at Greatrun.org/North10k