Enter the Bank of Scotland Great Scottish Run at www.greatscottishrun.com

As well as swapping their army boots for running shoes the team will be raising vital funds for Armed Forces charities.

The Royal Regiment of Scotland are hoping businesses all over the country follow their lead by recruiting a team and signing up to the Bank of Scotland Great Scottish Run Business Challenge.

Effective teamwork is an essential part of army life, and any business can employ these tactics. Galvanising a group creates inspiration and motivation to help reach collective goals, whether they are to cross the finish line or raise a target amount for charity. Getting away from normal working environments encourages people to get fit, and instils fun and camaraderie between colleagues who are also there to lend support if the going gets tough.

Any organisation, small or large, can submit a team. With 100 days to go, it’s an ideal time to start training strategies, company boot camps, design any eye-catching team outfits or build up some business-to-business banter by engaging in friendly rivalry with other company teams.

There are options to run 10K or to stretch to the half marathon route which covers 13.1 miles. Teams can be a mix of men and women, with a minimum of four people and a maximum of eight.

Sergeant Major Sammy Parker of The Royal Regiment of Scotland said: “Fitness is an integral part of Army life and team cohesion provides willingness to succeed. Our soldiers are very proud to represent not just the Regiment but communities around Scotland so we will be delighted to put a team into the Great Scottish Run. Hopefully it will prove a great day for everyone and raise a lot of money for deserving causes.” 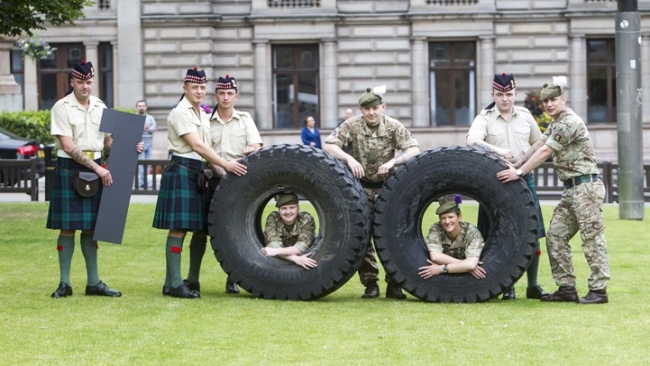 Scotland's biggest weekend of running, which this year will be staged on the 1st and 2nd October, will feature up to 30,000 runners of all ages and abilities across the Super Saturday family events, the 10k and half marathon, with and the half marathon televised live on BBC Scotland.

Starting at George Square in the heart of Glasgow, the Bank of Scotland Great Scottish Run sees runners follow the iconic 10k and half marathon routes through the city before they enter Glasgow Green and reach the tree lined finish straight in the shadow of Nelson’s Monument.

Andy Mitchelmore, from the event organisers the Great Run Company, said, "It’s fantastic that we’ve got an Army team taking part in the Business Challenge. It’s a great initiative to get employees working towards a common goal and motivating each other along the way. We would encourage all businesses to sign up and be on the start line come Sunday 2nd October.

Bank of Scotland has sponsored the event for eight years and this will be their second year with BBC Children in Need as its chosen charity of the year.

For more information and to enter the Bank of Scotland Great Scottish Run 10k or half marathon visit www.greatscottishrun.com