A father who lost his business after his alcohol addiction spiralled out of control has managed to turn his life around thanks to running and will take on a 10-mile challenge to support his local community.

Billy Stevens, from Portsmouth, went through a dark chapter in his life when he became addicted to alcohol and drugs and ran his company of ten years into the ground.

He says that he couldn't start the day or leave the house without drinking and became consumed by anxiety that he relied on alcohol to suppress it.

He moved out of his home with his children and battled his addiction for six years before finally seeking help.

He sought help from a recovery centre called Inclusion, and was admitted to the ANA centre in Portsmouth. He underwent a detox programme and was given professional counciling and a specialised programme to follow after his treatment.

Billy managed to turn his life around and has been clean of all substances for the past 11 months.

While at the treatment centre, Billy took up running around the gardens to regain his fitness, encouraging others at the centre to join him.

After he found a home in the city, he continued to run and decided to enter the Simplyhealth Great South Run on Sunday 22 October to give back to his community that supported him.

Billy, 40, said: “This time last year though I couldn't start the day or leave the house without having a drink me let alone get up and take part in a 10 mile run.

“It was a hopeless state I'd ended up in but it hadn't always been that way.

“I'd always enjoyed a drink with friends but I couldn't handle my feelings and emotions when not intoxicated and constantly escaped them through my addiction.

“Even at the cost of my job and relationships I couldn't stop drinking as I was out of control and suffering both mentally and physically.

“The damage to my liver was very high and I was causing so much stress to my family.

“I eventually sought help through a place called Inclusion who got me admitted to ANA treatment centre here in Portsmouth.

“I was given an amazing programme of recovery and I have now remained clean for the past 11 months.

“It was at the treatment centre that I started running around the garden to regain my fitness. I wore away the grass where I ran every day and a track formed where others began to join me until there were quite a few of us doing laps of the garden every morning.

“When I graduated to secondary treatment I heard others were still using the ‘running track' I'd formed and that lifted my spirits.”

Billy began to volunteer at Portsmouth Film Society where he heard about the Simplyhealth Great South Run and decided to sign up. 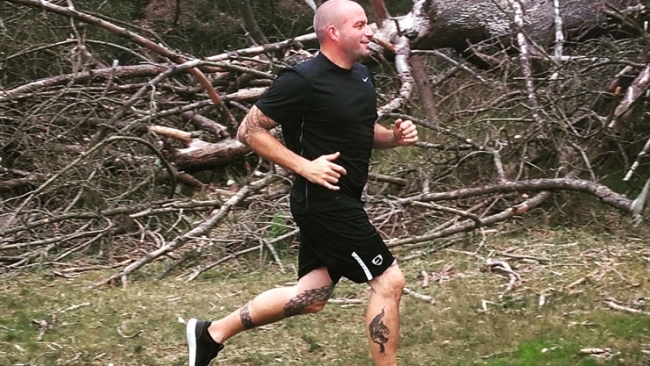 He will join over 20,000 others at the world's leading 10 mile running event, which features a fast and flat course around Portsmouth and Southsea, starting and finishing on the scenic sea front.

Billy says that he has been given a new lease of life and the event will mark a year since he has been sober.

He added: “ I feel that my life has really begun since I turned 40, my family no longer worry about me and my children have their father back in their lives.

“I decided I wanted to give back to a community that has done so much for me and the society has really helped me turn my life around.

“I met some amazing people there and when the staff mentioned the Simplyhealth Great South Run, I thought it was the perfect opportunity to raise money for a cause close to my heart.

“Taking on this run shows that you can turn your life as I have lots to live for and look forward to.”