Entries for the Simplyhealth Junior and Mini Great Manchester Run are open. Enter now at: Greatrun.org/Manchester

Five year old Henri Hyde is determined to take on a big challenge at this year’s Simplyhealth Mini Great Manchester Run to raise money for the Royal Manchester Children’s Hospital which saved his life.

Henri, from Hyde in Stockport, suffered from brain damage in February 2015 when he he suffered from a rare autoimmune disease that left him fighting for his life.

Henri’s body began to attack itself, meaning that his brain and spinal cord became inflamed. The schoolboy was diagnosed with Acute Disseminated Encephalomyelitis (ADEM) and was transferred to Intensive Care Unit at the children’s hospital.

Henri’s condition was triggered when he started suffering from tonsillitis and a fever. His mum Kayleigh became concerned when she realised that he had completely lost the ability to walk and talk. He was rushed to hospital where he underwent blood tests, a CT scan and MRI scan and was placed on drop and feeding tubes to be stabilised.

After spending five days in intensive care and a further two weeks at the hospital, Henri was finally able to go home, but still suffers from memory and mobility problems.

Henri decided that he wanted to help give something back to the Royal Manchester Children’s Hospital who looked after him and signed up for the Simplyhealth Junior and Mini Great Manchester Run.

On Sunday 28 May, Henri will also be a special guest race starter for the Simplyhealth Mini Great Manchester Run, which will be a huge achievement for him after his shock diagnosis.

Mum Kayleigh said: The hospital thought it was just a virus, so sent us home. “The next morning Henri had lost the ability to walk and talk or even move his left side. He was deteriorating so quickly that he was immediately transferred to PICU at Royal Manchester Children’s Hospital.

“I had no idea what was wrong with Henri and was completely devastated at how ill my little boy was, but I was comforted in knowing he was in the best hands possible.

“The doctors told us that Henri had a long road to recovery but I knew one thing; we’d stick together as a family and we would never give up.

“To help get his movement back Henri started intensive physiotherapy to be able to walk again.

“After spending 18 long days in hospital we were delighted to be given the news that Henri could go home and he would continue to receive physio within the community setting.” 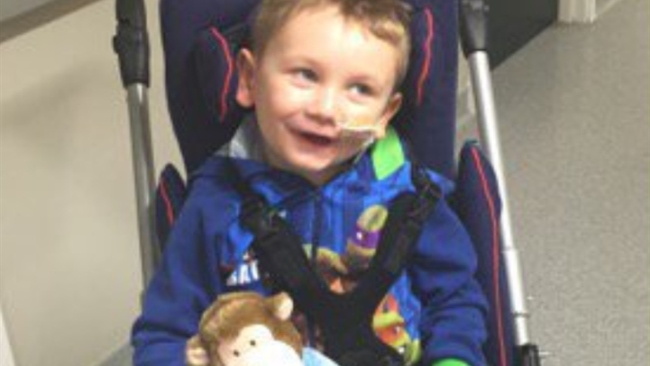 Henri will join over 2,000 kids for the Simplyhealth Junior and Mini Great Manchester Run which is coming to a brand new city centre location for 2017.

Thousands of children will be able to take on the iconic Manchester city centre route that has been ran by celebrities, elite athletes and fundraisers for the last 15 years.

Kids will line up on the Simplyhealth Great Manchester Run start and finish line and is perfect for children whose parents are taking on the 10k as the kids’ events finish before the it starts.

Mini runners aged 3-8 can take part with their parents and Juniors aged 9-15 are able to also take part.

Kayleigh added: “Henri may never fully recover from the ADEM and he is still under the care of the neurology team at the hospital. “The processing part of Henri’s brain has been affected which makes it extremely difficult for him to retain information.

“We’re over the moon that Henri is walking and talking again although he does become tired easily, but I thank my lucky stars that he is still able to do the things that he enjoys.

“The nurses at the hospital were inspirational and true Angels, I find it difficult to visualise what could have been reality should Henri not have received the care he did.

“Henri is determined to try and run the Simplyhealth Mini Great Manchester Run and he’ll have his sister Elsie by his side for support, but I know with his strength and determination he will try his best to cross that finish line.”

Royal Manchester Children’s Hospital Charity is raising money to ensure continued excellence in treatment, care and research at the hospital – improving the lives of thousands of children each year across the North West and beyond.

The charity has a number of places in the event up for grabs for a discounted price of £5.

Entries for the Simplyhealth Junior and Mini Great Manchester Run are open. Enter now at: Greatrun.org/Manchester