To sign up for the Simplyhealth Great Manchester Run, visit greatrun.org/manchester

A YOUNG runner will lead a huge brass band at the Simplyhealth Great Manchester Run to raise money for the children’s hospital that looked after her as a youngster.

Brooke Taylor, aged 15, suffers from congenital spondylolisthesis, a birth defect which means the spine slips out of place, but will take on the 10k run through the city centre on Sunday, 28 May along with a brass band as part of Brooke’s Barmy Army.

The teenager underwent surgery three years ago to correct her spine, and was told to avoid physical activity until the bone graft had fused – and last year’s event was the first she was able to do.

She will be joined by mum Melissa and dad Mark as part of a running team of 15, along with a 60-strong brass band who will turn the streets of Manchester into a cauldron of noise for Europe’s biggest 10k.

She will be joined once more by clinical head of Royal Manchester Children’s Hospital, Jim Bruce, who first operated on Brooke when she was a baby after she was born with a rare pelvic tumour.

Melissa said: “We’re starting to think ‘what have we done’. There’s a team of 15 runners with 60 more who will be part of the brass band with drummers.

“After last year, some friends and family thought that this year they could be part of it as well, so Brooke decided to get a team together and everybody agreed. She plays in a brass band and the idea formed to have a marching band going round the route.

“It has brought a lot of brass bands together, bands from all over the north west.

“They’ll be playing a lot of the traditional brass band music but they’re also going to be rehearsing some more modern music to play and entertain people on the day.

“We have taken part before and it’s such an incredible atmosphere. Some of our runners won’t be the fastest but they are going to have entertainment all the way round.” 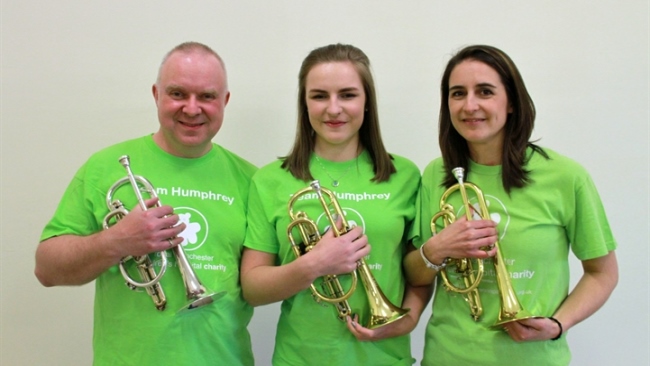 The initiative has left Melissa as proud as punch of her daughter, who will be taking time off revising for her GCSEs to participate in the 10k.

She added: “I’m chuffed she has inspired so many people to do it, and proud that she has been able to pull this round. She is very much looking forward to it. It’s in the middle of her GCSEs but she is looking forward to the break.

“She’s yet to decide whether she is running or not. She wants to run but she also wants to be part of the band.

“It’s going to be something different that we haven’t seen before. It will be nice to entertain the crowds.

“It will really add to the atmosphere on the day, and it’s great that she has managed to get so many friends from her brass band involved. Brooke and her family have been loyal fundraisers for our charity for many years so it really means a lot that they continue to support us in every way that they can.

“We are sure that the Brooke’s Barmy Army will get a lot of attention on the day, which will be great to raise awareness for our hospital and the fantastic work it does.”

To sign up for the Simplyhealth Great Manchester Run, visit greatrun.org/manchester