The central defender joined a team of fundraisers from Pompey in the Community at Fratton Park stadium. Five of the fundraisers are part of the charity's disability division, who are supported with football sessions from the foundation's coaches and are taking on the 10 mile event for the first time.

They have signed up to the Simplyhealth Great South Run, which takes place on Sunday 21 October, to give something back to the charity and to take on a physical and personal challenge, despite their disabilities.

26-year-old Christian Burgess is an ambassador for Pompey in the Community and has supported the team of runners on the city's streets when they have taken on the 10 mile run over the last two years.

He said: "The Simplyhealth Great South Run is a brilliant weekend of sport, the people on the streets of Portsmouth make it a great atmosphere to be a part of.

"It's very inspiring to see so many people taking part for charities, good causes and to keep fit.

"Pompey in the Community is important to the football club because there's a lot of work that goes into the community. We are lucky at Portsmouth to have people that want to give something back and increase participation for charity."

In 2017, over £3.5 million was raised by runners at the event for charitable causes. A group also raised over £5,000 for Pompey in the Community at the Simplyhealth Great South Run last year.

The team was formed by Steven Phillips, from Waterlooville, who has taken part in the event four times.

Steven said: "I regularly take part at Great Run Local at Hillsea and I have ran the Simplyhealth Great South Run five times before.

"I really wanted to take part again for a local charity. As a lifelong Pompey fan, I approached Pompey in the Community and was delighted that they were keen on the idea of setting up a team.

"The rest is history and we have had two successful campaigns and cannot wait for the next Simplyhealth Great South Run.

"Donators have been very generous and it's been a great opportunity to promote the outstanding work that the charity do for the city."

Fellow fundraiser Antony Irvine, who lost four stone by taking on the PitC weight loss programme and signing up to the run, also joined the team at Fratton Park.

He said: "I decided to run 10 miles for Pompey in the Community because of how much of a difference they've made for me and my family.

"The charity ran a scheme called ManvFat to support men to lose weight by taking part in a football league.

"Before I joined I was well over 17 stone and could not run at all. By the time the event came round I had lost four stone and trundled round the course in 1 hour 45.

"My Simplyhealth Great South Run experience was exactly what Pompey in the Community is all about – lots of people doing their bit, but when you add them together they can really make a difference." 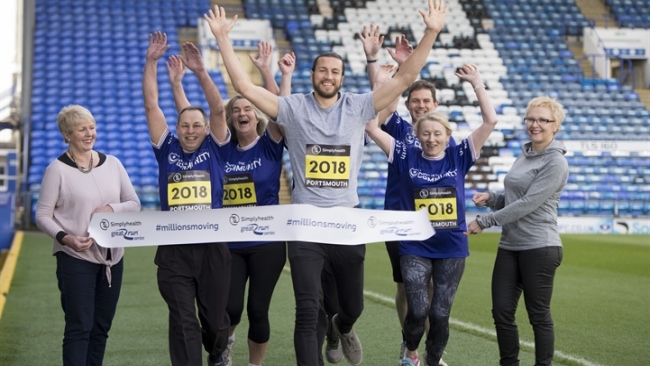 The Simplyhealth Great South Run offers participants the challenge of taking on a 10-mile challenge with thousands of others, no matter what their pace or motivation.

Runners experience an event like no other as they take in Portsmouth's iconic sights and celebrate everything that's great about the historic city.

Commenting, Romana Abdin, CEO of Simplyhealth said: "Our purpose is to help people make the most of life through better everyday health. We believe that movement is not the preserve of elite athletes, but is the cornerstone to good physical and mental wellbeing for all, no matter your ability or age.

"We're proud to be title partner of the Simplyhealth Great South Run and would encourage everyone to join the #millionsmoving. If you're in need of advice and inspiration to get active take a look at www.millionsmoving.co.uk."