Great North Run stalwart ‘Jarra' Jim Purcell has been recognised for his outstanding contribution and dedication to fundraising at a special event held in his hometown.

The Mayor of South Tyneside, Councillor Richard Porthouse, held a civic reception for Jim, 94, who is famous for raising money for local charities and has taken part in 29 Great North Runs.

The Second World War veteran first put on his running shoes at the age of 65, after the death of his wife Betty in 1982, and has since raised hundreds of thousands of pounds for charity.

The great-granddad carried the Olympic flame through Wallsend in 2012 and is still running today despite having two knee replacements.

Jim, of Falmouth Drive, Jarrow, said: “I can't understand it, I'm just an ordinary man. I feel like I'm on cloud nine.”

The Mayor added: “We decided a while ago to hold a civic reception for Jim so we could thank him on behalf of the whole of South Tyneside for all of his tremendous charity work for local worthy causes that support people across the borough and the region.

“I felt passionately that Jim deserved credit for not only his extensive charity work but his dedication to Jarrow and the Great North Run.

“It has been a real privilege to meet and thank Jim for his continued contribution to the local community, including his work with the church, his fundraising for charity and his other tireless voluntary work. 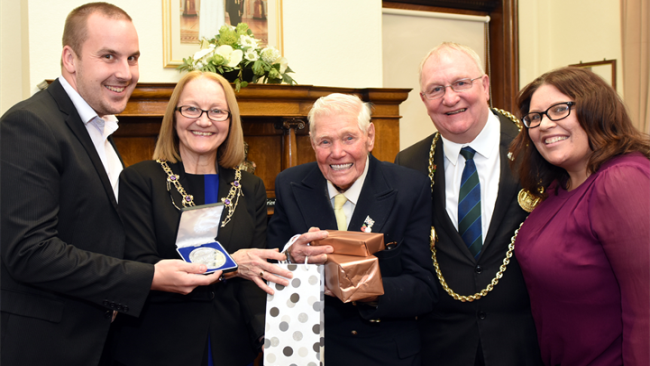 “He is a true old solider and a terrific fundraiser who has helped so many through his running and kind heartedness.”

Jim was invited into the Mayor's Parlour where he was presented with a civic wine glass and a limited edition Great North Run Million Medal on behalf of the Great North Run.”

Joe Milner, Events Manager for the Great Run Company, said: “On behalf of everyone at The Great Run Company it is an honour to present Jim a medal in recognition of his fund raising over the past 29 years. Jim is a true inspiration and helps make the Great North Run the world's favourite run.”