• First time annual 10K will take participants through city centre
• Another first for event: Two start lines on Colmore Row
• £10 discount if signing up for 10K and Great Birmingham Run

The new and improved Simplyhealth Great Birmingham 10K route will be a Bank Holiday Weekend celebration of Birmingham as it passes some of the most famous landmarks in the city centre.

Organisers of the annual 10K, which takes place on Sunday, May 26, have worked with Birmingham City Council to create a new route that showcases to thousands of runners and spectators iconic locations such as New Street, the Rotunda and the city’s most photographed resident – the Bullring Bull.

This is the first time the 10K will take runners and walkers through the historic heart of Birmingham city centre and along New Street.

In another first for the Great Birmingham 10K, there will be two start lines – both on Colmore Row either side of its junction with Bennetts Hill. Depending on which side of Colmore Row participants start they will assemble along Waterloo Street and Victoria Square or towards Birmingham Cathedral.

Organisers will release a running wave from the Cathedral stretch of Colmore Row then alternate with another wave from Waterloo Street and Victoria Square.

The route then follows Bennetts Hill and turns left on to New Street, crossing Corporation Street alongside the Apple store, the stunning grade II-listed building built in 1869 as the head office of the Midland Bank.

After passing the Rotunda and Bullring, runners will see the brand new Primark Pavilions development on High Street, due to open in April with the world’s biggest Primark store among other new retail and leisure attractions.

Participants will also go past Birmingham Children’s Hospital – which will have hundreds of people taking part in the 10K raising funds on its behalf – before leaving the city centre to continue along the A34, where bands and live music will motivate those taking part, and a grandstand finish back in the city centre at Aston University. 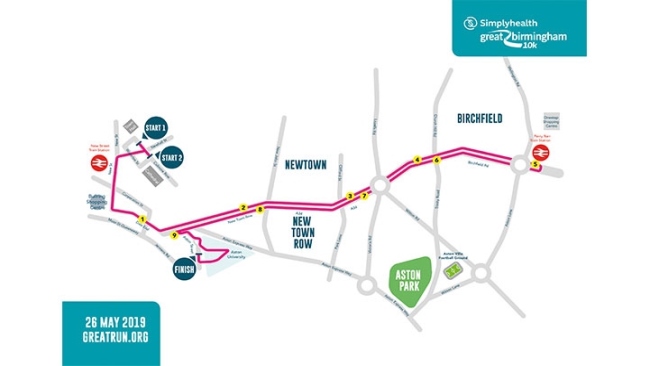 Alongside The University of Birmingham and Birmingham City University, Aston has pledged to have teams of hundreds of staff, students and alumni taking part this year.

Coffee shops and stores will be open for business along the city centre streets hosting the Simplyhealth Great Birmingham 10K, making it a great opportunity for spectators to spend  Bank Holiday Weekend in the city centre while cheering on friends and family.

Steve Hewlett, Manager of Retail BID, the Business Improvement District for the city centre retail area, said: “We are delighted that the Simplyhealth Great Birmingham 10K will come through the main streets in the city centre for the first time. New Street and High Street will be an ideal viewing point for families and friends and all the coffee shops and places for breakfast will be open as well.”

More than 8,000 participants signed up for last year’s 10K, making it the biggest to date. Some 350 of the participants walked the route and even more are expected to join the Walking Wave this year.

David Hart, Partnerships Director for the Great Run Company, organisers of the Simplyhealth Great Birmingham 10K, encouraged people to sign up now to secure a place:

“It will be a Great Run first to have two start lines for one event and also the first time we will see participants run along New Street. We are pleased to be able to feature some of the more iconic parts of Birmingham on the 10K route,” he said.

The Simplyhealth Great Birmingham 10K also features the Business Challenge, which pits corporate teams against each other for fastest-time trophies in small, medium or large business categories.

Among the firms in training for the 10K Business Challenge is the Birmingham office of professional services giant PwC, which will have a team of 200-plus taking part, with runners and walkers of all ages and abilities raising money for charity or simply lining up against colleagues for a day of activity.