The pair are running as part of the Newcastle Can initiative, spearheaded by Hugh, which is aiming to make the city fitter and healthier.

With the involvement of individuals, communities and businesses across the city, the project’s ultimate goal is to see Newcastle lose a combined 100,000lb in weight.

The Newcastle Can initiative is on a mission to get communities throughout the city working together to change the way they live, work and play, and help make Newcastle the healthiest, happiest city it can be.

Runners of the Simplyhealth Great North 5k have the exciting opportunity to join Hugh and Ross in the special ‘Newcastle Can wave’ at the biggest sporting weekend in the North East.

Participants can simply select if they wish to be a part of the Newcastle Can wave when entering the Simplyhealth Great North 5k via the online entry form.

They will be given their own start with Hugh at the event, which takes participants on a scenic tour of the Quayside, crossing the Swing Bridge and the Gateshead Millennium Bridge, before returning to the Newcastle side. 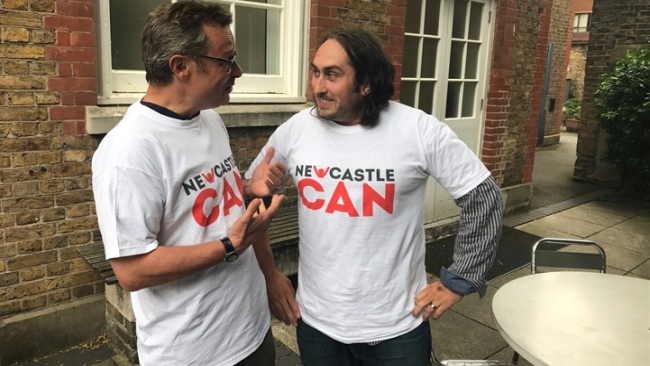 Hugh said: “Newcastle is leading the way. I’m hoping that towns and cities across Britain will take up the challenge to eat better and get healthier.

“Events like the Simplyhealth Great North 5k are a fantastic way to become more active – not least because there’s so much support from other runners, and spectators.

“I’m a novice myself so I’m looking forward to the run with a certain amount of trepidation!

“But it’s fantastic to know that Ross is now on board and will be joining me, and many others, as part of the Newcastle Can wave on the day.”

Supporters have access to diet and health tips, as well as information about challenges and events like the 5k.

Thousands of people are already signed up – with Ross now adding his support too.

Ross added: “A couple of weeks ago I joined Newcastle Can, something that Hugh Fearnley-Whittingstall is running in Newcastle to get our brilliant city healthy and fitter.

“Now I’ve only gone and also signed up to join him for the Simplyhealth Great North 5k as part of the Newcastle Can wave.

The Simplyhealth Great North 5k, which takes place on the Newcastle-Gateshead Quayside is part of the biggest sporting weekend in the North East.

To join Hugh and Ross, runners can select the Newcastle Can wave when signing up at Greatrun.org/North5k – but hurry, because places are going fast!