26-year-old Loujane Alasi from Newcastle is taking part in this year’s Great North Run to help raise funds and awareness of the incredible work of Success4All, a charity that supports children and young people in the North East. She’s also running to encourage more Muslim women and women from marginalised communities to participate in outdoor sports and make the most of outdoor public spaces.

Loujane now works for Success4All, an education charity based in Newcastle, it was established to support young people in some of the region’s most deprived communities. The charity aims to prepare children and young people for a brighter future by equipping them with 21st-century skills and creating a community where they are valued and supported and feel like they belong.

Loujane explains, “No one sends their child to school for them to come home feeling like they can’t achieve their goals. Sadly, from my own experience, I know that that’s often the case, especially for children from low socio-economic backgrounds and that’s just not right.

“I’m so lucky that I get to see the behind-the-scenes of Success4All and how they positively change the trajectory of so many lives.

“Growing up I wish I had Success4All supporting me and my family, because like many of the children we work with, I didn’t speak a word of English when I arrived in this country and for a long-time didn’t feel like I belonged in the UK.” 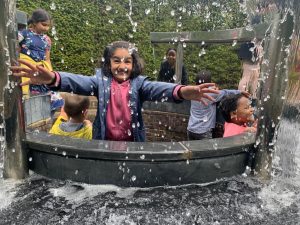 Loujane only started running at the start of the second lockdown in November 2020 to help manage her wellbeing, while she finished her Master’s at Newcastle University and began job hunting.

During the first lockdown, she found comfort in lockdown baking and like many people, gained weight stuck at home with limited outlets to stay active.  With gyms & fitness centres closed, she downloaded a running app and headed to her local park.

Loujane explained, “Since then, my relationship with running and exercise, in general, has completely changed. It’s given me so much and it has taught me a lot about myself.

“From April to May, I was observing the Holy month of Ramadan, and whilst many athletes continue their training as normal, I decided to use it as an opportunity to take a break.

“After Ramadan, I struggled to get back into running, let alone entering the Great North Run. When I did decide to enter, I knew I had to fit my training around working full-time, which meant either waking up extra early or training after work.

“Either way, as a woman and a visibly Muslim woman at that, there were certain safety considerations that I needed to take into account. For example, I could only train when there was enough daylight outside, I needed to be familiar with the route and how busy/quiet it would be, and I also needed to let someone know I was out on a run.

“It’s really hard when you don’t see yourself represented in certain places or events because it makes you wonder whether you should even be there in the first place.

“I don’t remember seeing many, if any hijabi runners in the Great North Run, but I saw one hijabi runner last year when I was watching it as a spectator, and I remember feeling so proud of her even though I had never met her.

“It showed me that if I did want to do it, I could do it, I hope my being there might inspire another Muslim woman or young person to take part next year.”

“My advice to anyone thinking about taking up running is don’t worry about what other people will think, don’t worry about how far you have to run or how fast or how long it’s going to take you – just enjoy it and enjoy the freedom that comes with running outdoors.

“15-year-old Loujane would be in disbelief that she was taking part in the Great North Run, but she would hopefully also be proud of how far she has come.

Loujane’s fundraising will go towards Success4All’s digital divide fundraising campaign. The campaign aims to tackle the devastating digital divide that exists in the North East by donating laptops to households without access to a digital device, connecting families to the internet and providing parents/guardians with free 6-week IT workshops.