Family and friends of the inspirational late Matt Hadden, who was the final finisher of last year’s Simplyhealth Great North Run despite living with a rare form of cancer, will return to run the half marathon this year in his memory.

Matt, from Darlington, was diagnosed with Sarcoma, that affects the bone and soft tissue, which resulted in him having his left leg amputated.

He took part in the Simplyhealth Great North Run with a prosthetic leg to raise awareness and funds for Maggie’s, a centre that offers advice and support to those going through cancer in the grounds of the Newcastle Freeman hospital.

By sheer determination, Matt walked all 13.1 miles with family, friends and supporters cheering him on. While Sir Mo Farah crossed the finish line first, Matt walked across last, and was crowned, ‘the true winner of the Great North Run.’

Sadly just months later in December, Matt passed away at the age of 28.

This year, his sister Helena will be among a team of over 30 friends and family who will return to the world’s biggest half marathon on Sunday 9 September to run the 13.1 miles for her brother. 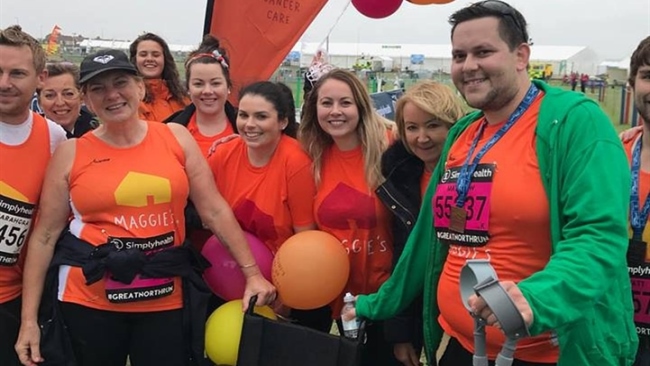 Helena, 25, said: “I have so many memories of Matt from last year’s Simplyhealth Great North Run.

“I’ll always remember us crossing the Tyne Bridge and singing ‘Sweet Caroline’ while going into the final mile.

“We wanted to do the event again in my brother’s memory to support Maggie’s. Maggie’s is a haven of calm at what can be a hectic, often scary time. Maggie’s is there for people in so many ways covering them for all of the unexpected scenarios that come with cancer.

“Without this I think a lot of people wouldn’t know how to cope with some situations. They are so needed. It’s unbelievable how much they help people and I’m honoured to run for them again.”

Matt’s close friends Abby Crawford, who lived with him when they worked in Leeds, and twins Jonathan and David Stretton-Downes, 29, from Newcastle, have all been inspired by Matt. Abby, 28, added:

“Seeing Matt have to move back to the North East away from his dream job as a police officer when he was diagnosed was devastating and the thought of him spending the rest of his short life in and out of hospital wards so far away from me was horrible.

“Seeing your best friend go from on top of the world to palliative care with an incurable cancer diagnosis within two years is not something you’re ever prepared for in your twenties, but it was a constant reassurance to know that he, his friends and his family had a local, homely environment they could retire to when yet another hospital appointment had finished.”

Many other people were inspired by Matt’s story, sending messages of support and sponsoring his fundraising page which jumped up from a few hundred pounds to over £7,000, far exceeding Matt’s original target of raising £2,400 to pay for a whole day at Maggie’s. 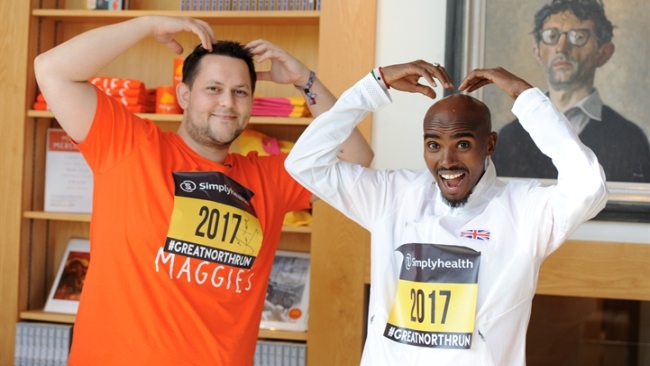 Out of 57,000 runners, Sir Mo Farah chose to surprise Matt at Maggies before the event last year, inspired by his story and determination.

Meanwhile in Switzerland 48-year-old Christian Schlumpf was watching the BBC coverage of the Simplyhealth Great North Run and was so moved by Matt’s story that he decided to sign up for the 2018 event.

He will travel almost 1,000 miles to the North East to take part in the event for Maggie’s and has already raised almost £700.

Christian said: “I was watching the coverage of the Simplyhealth Great North Run on the BBC with my wife Marijana. There we watched the interview with Matt and the story was so moving.

“I told my wife I would love to run the Simplyhealth Great North Run once. She then got our laptop and signed me up straight away.

“I haven’t had a personal experience with Maggie’s yet, but the support I’m getting as a fundraiser is great. Both my parents suffered from cancer. We don’t have a Maggie’s Centre in Switzerland but I’m sure we would have suffered less if we did.”

Maggie’s centre head, Karen Verrill said: “Matt was an incredible young man, and a much-loved centre visitor. He described Maggie’s as his, ‘emotional A&E’ as he could always drop-in for a chat, whenever he was having a bad day.

“Every day, we welcome over 100 visitors to Maggie’s Newcastle. Our in-house team of experts offer practical, emotional and financial advice over a cup of tea in our homely environment. I think it’s amazing that everything at Maggie’s is funded by the local community. Thank you to everyone who has supported us and continues to support us.

“Over the last few years our Simplyhealth Great North Run team has grown from 35 runners to nearly 200. It’s an incredible day with an electric atmosphere!”

To support Maggie’s, follow their Facebook page at www.facebook.com/maggiesnewcastle or to donate to Matt’s tribute fund in aid of Maggie’s visit: www.1formatt.muchloved.com

Kelly Dicks, who co-hosts the successful podcast Single Malt Marathoners, is taking on the Great Bristol Run this year.