A family from Macclesfield are taking on a day of running in Manchester to raise awareness about epilepsy after their son Nathan was diagnosed with the condition.

Matt and Nicky Wood will cheer on their son Nathan, 10, at the Simplyhealth Junior and Mini Great Manchester Run on Sunday 20 May, who decided to sign up to the event after he was diagnosed with epilepsy.

Nathan was diagnosed with the condition in September last year after having a seizure and injuring himself.

After being in hospital for several days, Nathan was diagnosed with epilepsy and began the process of trying the multitude of medications that may help to control it.

The family had a tough year as Nicky was also diagnosed with breast cancer and was going through chemotherapy, but they decided to turn their experience into a positive by fundraising for charity.

Nathan decided to fundraise for Epilepsy Action to raise awareness about the impact that the condition has on children's lives and to support them & their families.

His mum and dad will also run the Simplyhealth Great Manchester Run on the same day to raise money for the Christie Hospital in Manchester, the cancer centre where Nicky was treated.

Matt, 43, said: "Nathan was diagnosed in September 2017. He was due to see a consultant as we suspected he had epilepsy but unfortunately he had a seizure, fell over and banged his head badly.

"He ended up in hospital for several days and missed the first week back to school. The positive side was that he was diagnosed whilst in hospital and was able to start his medication early.

"Nathan always tries to maintain as normal life as possible but it can be difficult as he still has around 8 seizures every day, mostly at night, which makes him tired. Outside of school he is an active person, he makes sure that whatever he does he minimises the risk of hurting himself if he has a seizure.

"We've taught him that it's good to talk to others about his epilepsy so that everyone is aware of what's going on if he has a seizure.

"The medication he's on does impact his mood and having the seizures does get him down sometimes. He mostly stays strong but sometimes does get pretty upset.

"We had a tough year in 2017 because Nicky was diagnosed with breast cancer and so she's spent the year going through chemotherapy and other cancer treatment at the Christie but we wanted to do something to show our support." 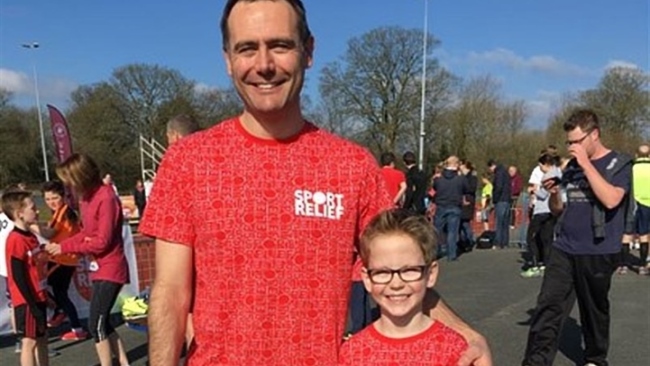 It doesn't matter how participants run, why they run or how fast they go, everyone is a hero when they cross the start line of Manchester's biggest weekend of running.

Matt added: "We're told that 75% of people with Epilepsy like Nathan's (partial complex seizures) can find a drug or combination of drugs that stop the seizures completely.

"Some people need to stay on this medication for their whole life but others do grow out of Epilepsy.

"Fundraising is important because we'd like to be able to improve the treatment for others by using tools like mobile apps to log seizures and correlate that with the medication, and that is only possible through donations to charity."