Former Great Britain athlete Colin McCourt will take on the Simplyhealth Great South 5k as part of a risky bet set by his mates when they realised his weight had crept up to 14 stone.

Colin was set the challenge of breaking 16 minutes for a 5km run by 17 of his athlete pals, including Ross Murray and 2017 Simplyhealth Great South Run winner Andy Vernon, at the beginning of January.

If he fails to complete the challenge by the end of this year, he must get all 17 of their names tattooed on his body. If he manages to run less than 16 minutes at an official 5km event in 2017, he will be rewarded with £1,700 – £100 from each person.

Seven years ago Colin won the 1500m at the 2010 European Team Championships and made an appearance at the Commonwealth Games the same year.

But he retired in 2012 after failing to make the London Olympics and began to enjoy life as a non-athlete, gaining weight in the process.

His weight slowly crept up when he binged on fast food and by the beginning of 2017, Colin, who is from Bournemouth, weighed 94kg.

After posting a before and after picture on his social media earlier this year, his friends got in touch expressing their shock at his weight gain and the challenge was born.

Colin will take on the Simplyhealth Great South 5k on Saturday 21 October to try and beat his 16-minute challenge.

The event is part of the famous Simplyhealth Great South Run weekend, a festival of sport in Portsmouth and Southsea, featuring the world's leading 10 mile running event.

Colin, 32, said: “I went from being an active athlete to working full-time in a job that involves sitting down most of the day. “I was used to having everything done for me and not having to plan that far in advance. I stopped running in 2012 and I became quite disassociated with it.

“All of my sights were set on 2012 so when I didn't make it, I felt very low and was quite embarrassed that I had to go into an office job.

“I basically did nothing for five years. It felt so easy to think of an excuse to have another takeaway at night and then before I knew it I had gained a lot of weight, as I wasn't exercising.

“I was swapping my phone over in January and I came across some pictures of me when I was an athlete. My girlfriend took a picture of me now and I posted them both online to show the comparison and said I wanted to get back into shape.

“My friends all contacted me in our What'sApp group and were taking the mickey out of me and laughing because they couldn't believe it was me. The bet ended up coming from that.

“They really want me to lose and have said that the only way I can get out of it is if I break my leg or die, so I am trying my best to make sure I win and I definitely don't want the tattoos.”

Colin began his training while juggling a family life with his new baby. Within 30 days he had managed an incredible transformation and had lost 15kg.

He now weighs just over 11 stone and hopes to maintain this weight through all of his training.

He has been documenting his progress each day via his social media channels and vlogs to update his followers on his progress.

He has received huge support from the public, including runners who have also had troubles with weight gain. 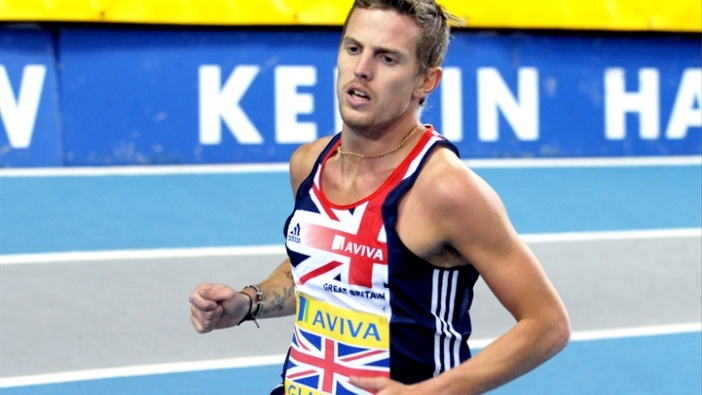 Colin added: “It has been very hard but I am proof to everyone that you have to start somewhere to succeed. “I had to teach myself to let go and to just do what you can at that moment and enjoy it. It felt good that I was able to something for myself.

“Over the days I just got better and did more and more and hopefully in time that will see me break 16 minutes.

“I am really keen on showing people how easy it is to get back into something. It's not about studying crazy training plans, it's just about getting out of that door and running and into a routine.”

Colin will be providing regular blog updates on his training for his 5km challenge on the Simplyhealth Great South Run website.

We're celebrating all of the #RealRunners who take part in the Great Run series. Share your running tales and fails across our social media.

Would you say you're an athlete?

I would not consider myself an athlete any more. I know people have a lot of different perceptions of what an athlete is but I think it's because I used to be one that in my view, I am not now. After I built my career around being an elite athlete and then retiring after the disappointment of not making London 2012, I became disassociated with running as an athlete because I was embarrassed that I'd ended up in an office job after having such high hopes.

I don't think of myself as that person now, I feel like a completely different person. Now I feel like I am an athlete because I am achieving a personal milestone even though I know I am not one any more.

What do you love about running?

Now I am back running, I have found how much I enjoy having head space, which is good for me mentally. I also love pushing myself and running has helped me to see my progress as a positive thing and I try not to focus on the negative aspects of the past.