This year’s biggest ever Simplyhealth Great Birmingham 10K proved to be a truly global gathering as thousands of people took part in the run that celebrated the city’s hopes of hosting the 2022 Commonwealth Games.

A record-breaking 8,000 people signed up for Sunday’s 10K, which was televised live on Channel 5.

Runners from 23 Commonwealth nations represented their countries to help Birmingham in its bid to replace Durban as the host city for the 2022 Games after the South African city pulled out.

They were among participants of all abilities who took part in the music-themed 6.2mile event from Jennens Road to its new finish near Millennium Point in its third staging in the city.

The event is organised by The Great Run Company, who will also stage the Simplyhealth Great Birmingham Run on Sunday, October 15, the same day as the first-ever Birmingham International Marathon. Entries are now open for both events.

Among the thousands of people taking part was Birmingham grandmother Hazel Williams who, at the age of 70, took on her first ever organised running event to help raise funds for the Multiple Sclerosis Society. Hazel’s daughter Katie suffers from the debilitating illness.

Hazel was joined by the extraordinary fundraiser ‘Blind’ Dave Heeley. The endurance athlete is marking his 60th year by taking on the Great Run series’ entire 2017 events calendar, in aid of the Albion Foundation, which will be a world first for a blind pairing.

Inspirational mum Shah Begum was also among the 10K participants. Since taking up running two years ago she has lost six stone and inspires first-time runners to take part through community running groups. 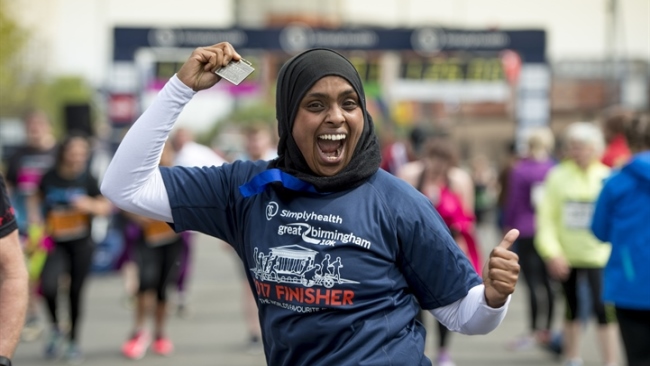 Speaking after picking up her Simplyhealth Great Birmingham 10K finisher’s medal Shah, who now has her sights on the Birmingham International Marathon, said: “The atmosphere is just amazing. When I did my first Great Birmingham 10K last year it really sparked my passion for running and it’s days like today that back that up.”

“I love taking part in events like this. Look at all the people who came out today to cheer us on, and the fantastic bands on the route. It’s amazing!”

The 10K featured a 19-strong team from title partner, Simplyhealth, some running for Revitalise, this year’s nominated charity, while the University of Birmingham amassed an incredible 400 runners for its 10K team and were given their own starting wave to see them off in style.

Ben Kent, Chief Financial Officer at Simplyhealth said: "As title partner our ambition is to get #Millionsmoving and show how you can make the most of life through better everyday health. It was fantastic to see so many people being active and beating whatever challenge they set themselves. There were so many inspirational stories and we're already looking forward to being back in Birmingham later on in the Series."

The Lord Mayor of Birmingham, Cllr Carl Rice, was honorary starter and was joined by Scottish athletics legend Liz McColgan, who helped wave the runners off before taking part in the event and flying the flag for Scotland as part of the Commonwealth Run initiative.

Scottish-born Liz is a two-time gold medallist over 10,000 metres at the Commonwealth Games in Edinburgh in 1986 and Auckland in 1990, as well as winning the 1991 World Championships and silver at the 1988 Olympic Games.

Midlands companies of all shapes and sizes took part in the 10K to battle it out for the PKF Cooper Parry Business Challenge, which hands out fastest-time trophies and all important bragging rights in the business community.

It was a day of firsts among the elite field with a winner who had never competed outside of Kenya before now.

Frankline Keitany toed the line in his first race on foreign soil, and provided the shock of the day by giving favourite Ugandan Timothy Toroitich a real run for his money and a cat and mouse battle which led to a thrilling finish.

David Hart, communications director for The Great Run Company, said: “It was great to see so many people not only taking part but coming along to support their friends and family too.

“With the Commonwealth runners showing off colourful flags and running tops, it was a day that everyone could enjoy and we hope to see our 10K runners taking on the Simplyhealth Great Birmingham Run or Birmingham International Marathon in October.”