Olympic champions Hannah Mills and Saskia Clark will set participants on their way at the Great South Run on Sunday 23 October.

Good friends and sailing partners Mills and Clark, who sailed to Olympic gold in the Women's 470 class in Rio this summer, will be honorary starters at the world's leading 10-mile running event when it returns to Portsmouth this Autumn.

Hannah will then join over 20,000 others to take on the 10 miles, in aid of the Andrew Simpson Sailing Foundation, a charity set up in memory of Andrew “Bart” Simpson.

The charity aims to “inspire the next generation” by using sailing to transform the lives of young people in the UK and around the world.

After Hannah and Saskia's gold in the two-person dinghy helped Team GB finish the Olympic sailing regatta top of the medals table, Saskia then returned to dry land to work at the foundation.

The Great South Run starts and finishes in Southsea, overlooking the Solent, which provided the backdrop for the previous Louis Vuitton America's Cup World Series event that was hosted by Portsmouth in July.

The fast and flat course has been graced by world-class athletes such as Liz McColgan, Paula Radcliffe, Sonia O'Sullivan, and Mo Farah, who won the men's race in 2009. 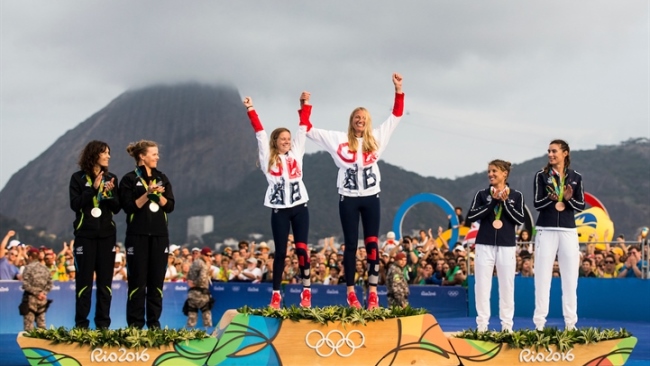 Hannah and Saskia, who are also nominated for the 2016 Rolex World Sailor of the Year Award, said: “It is wonderful for us to be asked to be honorary starters at the Great South Run in Portsmouth in a few weeks' time.

“Following on from the amazing events this summer, it is great to see events like this which really engage and motivate thousands of people to get out and get active.

“Hannah is going to go on and run it as well so if anyone fancies getting involved, there is still time.

“Getting girls involved in sport has always been important to us and it's something which Saskia is going to be focusing on whilst working for the Andrew Simpson Sailing Foundation, which uses sailing to engage young people and offer them fantastic opportunities moving forwards.”