A sports charity worker who hails from Worcestershire but now lives in South America will be returning to her Midlands roots to take part in this year's Simplyhealth Great Birmingham Run.

Laura Kyte has lived in Argentina since 2010, originally in the capital Buenos Aires, before moving to the Andes hill-town of Cachi, where she became a partner with UK charity Verité Sport which promotes a Christian presence in the world of athletics.

Because of its pleasant climate and being 2,400 metres above sea level Cachi welcomes athletes from across South America for altitude training.

Laura and her husband Fabio offer the town's visitors practical support with meals and sports massages and have even had athletes staying with them at their home.

Thirty-one-year-old Laura grew up in Alvechurch before studying French and Spanish at Oxford University (Trinity College) where she became interested in exploring more of the Spanish-speaking world, especially Argentina.

In March 2010, after several visits to South America, she moved to Buenos Aires for a two-year commitment as a volunteer with Latin Link.

“All of my family are still in the Midlands, and several good friends too,” said Laura.

“I would like to thank them all for their amazing support and encouragement over the last seven years in particular, despite the distance between us, none of what Fabio and I endeavour to do would be possible without their support.”

Starting in the city centre, the half marathon takes in iconic landmarks such as Selfridges, Cannon Hill Park, Edgbaston Stadium and Bournville.

Entries are open for the annual event that has established itself as the second-biggest half marathon in the UK and all Great Birmingham Run 2017 participants are given a guaranteed entry window for the Birmingham International Marathon in 2018.

“Initially our visit was going to be July until December, but we decided that it would be good for Fabio to make the most of doing some English study, so we will now be in the UK, based mainly in Alvechurch, from September until March 2018,” said Laura.

“I always wanted to sign up for the Great Birmingham Run and I'm really excited to run around the streets of my home city, hopefully with plenty of support from family!”

“I actually ran the inaugural Birmingham Half Marathon back in 2008, but have come on a long way since then (as has the event itself), so am hoping to put in a much better performance in front of those near and dear to me.”

“My last memories of having some quality time back in Birmingham was around Christmas 2014, Fabio's first in the UK.

“We went to the German Market, Christmas shopping Birmingham-style in the Bullring, to the Symphony Hall for the Christmas performance by the CBSO and we even managed a trip to Villa Park to cheer on the team.” 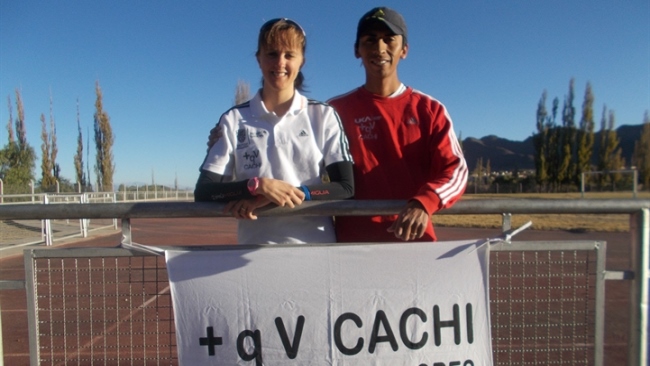 Laura works with Verité Sport director Stuart Weir to develop resources and sports chaplaincy at different sporting events. Verité has also provided equipment and funds to aid overseas sporting projects, partnerships which are often made possible through a Christian working in the world of sport.

“In addition to the climate, altitude and variety of off-road options, the appeal of Cachi is that it is the only rural town to boast a synthetic athletics track, small gym and 25-metre swimming pool during the Summer months, which attracts not only distance runners but also the multi-eventers such as triathletes and modern pentathletes, as well as swimmers and cyclists.

“We have also set up an athletics team called ‘Más que Vencedores' (More than Conquerors, after Romans 8.37).

“We aim to get alongside the young people of Cachi and create opportunities for them to train and compete, and the athlete-coach relationship provides chances to share our own experiences on and off the track, hopefully making a positive contribution to shaping the attitudes of our young athletes.

“My initial aim of moving to Argentina was to encourage local churches to incorporate sport and physical activity into their agendas based on the needs of the congregation and surrounding community.

“I estimated a stay of between five and 10 years, but did not in my wildest dreams expect to be married and living in the mountains, and even training with some of the country's best athletes. God works in mysterious ways!”

Sign up for the Junior and Mini Great Birmingham Runs here