Kelly Dicks co-hosts Single Malt Marathoners, a successful podcast created by her partner, John Cox, in which they interview fellow runners from all kinds of backgrounds and abilities. The 2012 Bristol 10k (as the Great Bristol Run was previously known) was the first race Kelly ever competed in and she’s looking forward to returning as an elite runner in the Half Marathon this year.

It was her enthusiasm for running that led her to first meet John when she joined her local running club, the Great Western Runners.

“We both love running and, after being friends for a few years, we became a running obsessed couple!”

The launch of Single Malt Marathoners

“John has been listening to podcasts for years – way before most people got into them – so when he was furloughed from work during the pandemic, he took the opportunity to start his own,” explains Kelly.

“Single Malt Marathoners reflects both his love of running and good quality single malt whisky and I was his first interviewee.”

When his original co-host friends took a step back from the podcast when they returned to work, John was keen to keep it going, so Kelly became his new co-host.

“Apart from one week off to go on holiday, we’ve managed to get an episode out every week since,” she adds.

There are now 118 episodes of Single Malt Marathoners, featuring interviewees from elite athletes such as Clara Evans, who represented Wales in the Commonwealth Games this year, to local runners from the Bristol area who talk about their enthusiasm for running and what motivates them.

“Every runner has a story,” says Kelly. “I really enjoyed talking to [British long-distance medallist] Chris Thompson, but it’s also always interesting to talk to people who still have regular jobs, but whose passion for running is a big part of their lives. We recently interviewed Melissah Gibson, who has run almost 100 marathons. It was amazing to listen to her.

“We love going to local races and interviewing the runners. It’s always nice to speak to people about what running means to them, then to see them go and perform in a race.”

As well as taking part themselves, Kelly and John will be interviewing runners in this year’s Great Bristol Run. 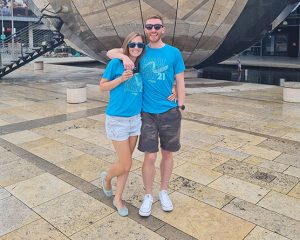 A way of life

As well as her podcasting duties and her full-time job as a primary school teacher, Kelly continues to make running an important part of her routine. She usually runs first thing in the morning before her busy working day begins and continues to join the weekly Great Western Runners session on Wednesday evenings.

“John and I make the most of the Ashton Court Parkrun on Saturday mornings and Sundays are a good day for a long run around Bristol. I also often take the kids at school out on a Friday afternoon for a run around Long Ashton.”

For Kelly, this will be the 8th time she’s taken part in the Great Bristol Run Half-Marathon.

“We do it most years, as long as we’re in Bristol. We live on the Harbourside so the course is really close to our home and it’s a great race.

“To be running as an elite runner this time is fantastic. I’m hoping to come in at around the one hour 23 mark, which would be a new PB for me.”

As well as taking in Bristol’s iconic harbourside area, the Great Bristol Run Half-Marathon course out along the beautiful and peaceful Avon Gorge passing under the world famous Clifton Suspension Bridge, before joining the 10k route at Spike Island.

Entries for the Great Bristol Run 10k, Half Marathon and Family Mile which tale place on Sunday 25 September are now open here.

To listen to the Single Malt Marathoners podcast visit: www.singlemaltmarathoners.co.uk

Here's a list of things you can ONLY see the Great Scottish Run! We can't wait to welcome you back on Sunday 2 October 2022.