The one-time fun runner, who hails from Middlesbrough, Teesside, said: “It is great to be back in Gateshead to launch the Great North 10k Gateshead.

“Having been on the podium before it has special memories for me, not least running with the Olympic gold medallist Stephen Kiprotich.

“From world class elites, to amateur runners taking part for loads of different reasons, it's a great day out and a wonderful course to test yourself on.”

Matty was accompanied by runners taking on the 10k, who will join up to 5,000 participants on a route that takes in iconic landmarks on the Quayside including Sage Gateshead, BALTIC Centre for Contemporary Art and the Gateshead Millennium Bridge before crossing the finish line on the iconic Gateshead International Stadium track. 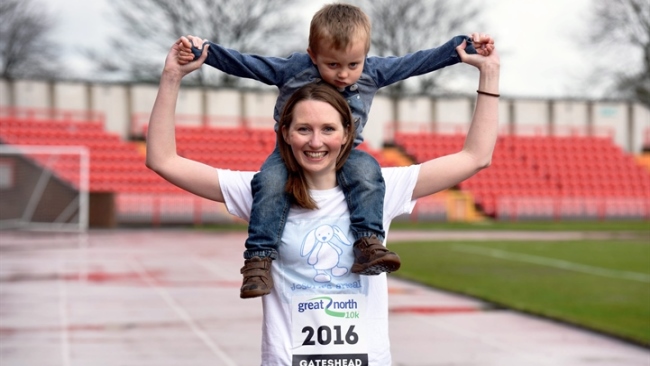 Matty was accompanied by runners taking on the 10k, including Amy Fawcett (above) from Morpeth in Northumberland. She is raising funds for Joseph's Appeal, a local campaign she set up in her son's name

These inclusive events – for all enthusiastic runners aged 3 and up – are designed to help families enjoy getting active together and will both finish inside Gateshead International Stadium.

“It's also the perfect opportunity for many to get some important training miles in ahead of the Great North Run in September.

“We're also thrilled to be able to include a family element in the event this year. It's really important to encourage children to enjoy being active from a young age.

“We are looking forward to welcoming thousands of people to the iconic Gateshead International Stadium for a special day in the region's running calendar.”

Gateshead Council's Cabinet Member for Culture, Sport and Leisure, Councillor Gary Haley, said: “Gateshead has a long established reputation for hosting major sporting events and we are delighted that the Great North 10k Gateshead is taking place again this year.

“This is a great route which will see competitors taking in some of Gateshead's most iconic sights along the way and finishing on the same track that sporting greats such as Mo Farah have competed on, at Gateshead International Stadium.”