An overweight mum turned life around while training for the Simplyhealth Great North Run after her initial plea to find a training buddy turned into forming a running group of 4,500 women.

Kim Scott, from Cramlington, was five stone overweight when she took up running ten years ago and would run alone in the dark, worried that people would laugh at her.

After losing five stone, she gained a place in the ballot of the 2015 Great North Run, she put a call out on Facebook for her friends to join her on her training so she wasn’t alone.

Kim was shocked when a huge group of women turned up at her local park ready to run with her and on her return home, she was inundated with messages from ladies who wanted to join her but they felt they were too overweight and unfit.

Two years on, Kim now has over 4,000 women as part of the These Girls Can Run group, which aims to focus on positivity over pace.

There are 11 groups of runners across the North East, stretching from as far north as Morpeth down to Darlington and Newton Aycliffe.

Kim was so inspired by the group’s efforts that she left her job in the police force to focus her efforts on These Girls Can Run.

There will be over 250 women from the group on the start line of the Simplyhealth Great North Run on Sunday 10 September this year.

Many of the women will be taking on the world’s biggest half marathon for the first time and are raising funds for a variety of local charities.

Kim, 39, said: “In February 2015 I found out that I had a place in the Great North Run. I didn’t want to train alone so I set up a little Facebook group and added my friends to see if anyone wanted to join me on my run.

“I turned up at the park on the first night to be met with so many women ready to run with me.

“This took me back to when I had first started running. I was 5 stone overweight and unfit so started running alone and in the dark, worried that people would laugh at me.

“I decided to make These Girls Can Run about those ladies, the ladies who felt just like I had all those years ago.

“I wanted to use our groups to break down some of the barriers which prevent women from exercising and build an amazing community of women who show that running can be for everyone.

“For the first time I felt I had found fulfillment in my work.”

These Girls Can Run is growing every day, with a new men’s group These Guys Can Run. Kim also hopes to be able to take her running community into schools to inspire children to enjoy running, even if they are not the fastest. 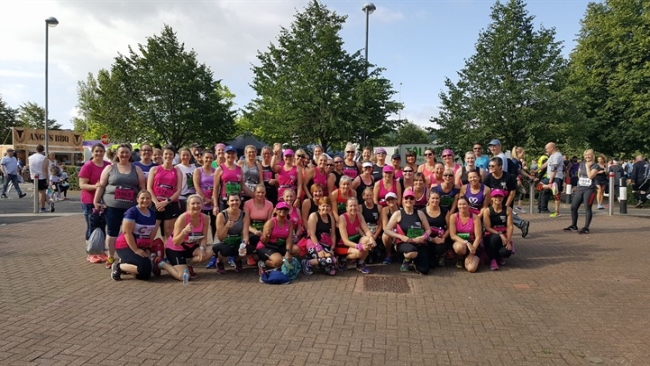 These Girls Can Run will more than double their attendance at the Simplyhealth Great North Run this year and will join 57,000 others for the iconic half marathon.

The event forms the biggest weekend of sport in the North East, with participants making the 13.1 mile journey from Newcastle to South Shields, crossing the Tyne Bridge and being cheered on by unrivalled spectator support.

Kim added: “The ladies who make up the groups inspire me every day.

“I have met some of the bravest, most courageous people over the last two years.

“I look around the group and I see some of the issues our ladies battle every day from mental illness to cancer and that’s what inspires me to keep working hard and growing our community.

“Running can give you an incredible sense of achievement but running in a group and as part of a community is so powerful.

“Every day we celebrate achievements and every day I hear people say “I couldn’t have done this on my own”.

“We always say that These Girls Can Run is so much more than a running group and it’s true. For some, including me it’s a real lifeline and the support and the sense of community every time we run is just incredible.

For more information about These Girls Can Run, visit their website.