A new mum who was diagnosed with Post Natal Depression after the birth of her first child will take on a running challenge for a Bristol charity that helped her through her darkest times.

Amy Dyer, from Brislington, was diagnosed with the condition when her baby boy Axel was just days old. She describes herself as feeling completely lost and losing her way in life at a time when she thought she would be enjoying motherhood.

Amy said she felt overwhelmed by being a mum and felt sheer panic and anxiety from when her baby was 10 days old. She realised that something was wrong with her behaviour and sought help from counselling sessions who recommended that she visit a local charity called Bluebell.

As well as receiving medication, Bluebell provided Amy with help and support through carers that came to her home and took her to meet other mums who had gone through a similar situation.

Once Amy had recovered both physically and mentally, she decided to give something back to the charity that had supported her and took up volunteering to share her experiences.

She also took up running as a way of helping her mental health with another mum from the charity. It was then that she decided that she would challenge herself at a long distance running event to raise funds for Bluebell to support them.

She will take on her first ever-running event at the Simplyhealth Great Bristol 10k when it returns to the city on Sunday 7 May.

Amy, 35, said: “My issue started very early when Axel was only ten days old. I had this feeling of overwhelming panic and fear.

“I was a first time mum and I thought that something wasn’t right but people kept saying that I would be fine.

“Eventually I went to counselling after speaking to my health visitor about it. I received medical treatment but then I was also put in touch with Blue Bell.

“With their help, I began to feel so much better both physically and mentally. The charity were a massive help.

“I went on a 12 week course with other mums who had gone through something similar and attended sessions on how to look after yourself and your baby.

“I saw a massive change in myself and I loved meeting other mums who were suffering to share our experiences.

“I was so inspired that I wanted to do something to help the charity and I decided to start volunteering to help other people who were suffering.

“I also started running with a friend from the group. Running outside helped us with our head space and once I got up to 5k, I decided to sign up to the Simplyhealth Great Bristol 10k to push myself further.” 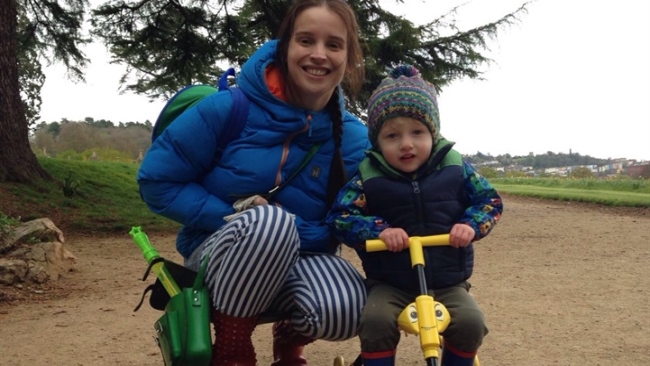 Amy will join over 12,500 others on a scenic 10k tour of the city at the Simplyhealth Great Bristol 10k. Runners start and finish in Bristol city centre and are taken along the Avon Gorge and pass under the iconic Clifton Suspension Bridge.

The packed day of sport also features the Simplyhealth Great Bristol Family Run, where children and their families can enjoy getting active together after the 10k event.

Amy is hoping to raise awareness and conversation about the effects of Post Natal Depression as it is often a topic that is not discussed by many women.

She added: “As many as one in four women suffer from Post Natal Depression but that is just the people who talk about it.

“So many women suffer in silence and I want to set an example that the key to your recovery is to talk about it and ask for help.

“I have joined the running community This Mum Runs who have also been instrumental in my recovery and running past my 5k barrier.

“Local groups like this and Bluebell have been instrumental in my recovery and I thought that by taking on a challenge like this, it would be a great way to give something back to them.”