A mum whose baby son was left severely brain damaged during birth is hoping to raise vital funds to send him to America for revolutionary treatment to help him walk.

Anna Wright, from Morpeth in Northumberland, wants to raise £25,000 after her son Samuel suffered a brain injury during birth and as a result was diagnosed with cerebral palsy.

He was resuscitated for 23 minutes and put onto a ventilator for six days, with his chances of survival being slim. Samuel pulled through, but as a result of the injury, the muscles in his body were affected, leaving him unable to walk, talk or eat.

Despite making a huge progress, including learning to sit independently, learning to crawl and stand, Samuel, who is now two, relies on being tube fed and cannot talk.

Although there is no cure for the condition, Anna and her husband Jonathan have spent thousands of pounds for Samuel to have private cutting edge therapies and equipment to help him progress.

The family hope to be able to fundraise to send Samuel to America to undergo therapy at the Neurological And Physiological Abilitation Centre (NAPA) based in Los Angeles, who specialize in feeding and speech techniques not available in the UK.

Anna will take on the Simplyhealth Great North 10k on Sunday 9 July to edge closer to the mammoth target.

Anna, 36, said: “Samuel suffered a brain injury during his birth and as a result of this he has cerebral palsy.

“After a normal, healthy pregnancy Samuel started to struggle during labour and his heart rate began dipping. By the time he was born he was not breathing and had only a very feint heart rate which was soon lost.

“Samuel was resuscitated for 23 minutes and then put onto a ventilator. During the birth and resuscitation he was starved of oxygen, which caused serious brain damage.

“We were told that Samuel was very very ill and was not expected to survive the night, however he is a little fighter and he did. He remained in hospital for a further 2 weeks then finally came home with us.

“There is no cure for cerebral palsy but there is medical evidence that early intervention with physical and feeding therapy is vital and can make a huge difference to a child's life.

“We have to fund nearly all therapy privately and we want Samuel to have the best chance possible so we have started fundraising so we are able to continue taking him to these places.

“In three weeks with NAPA, Samuel developed from occasionally dragging his body up to lean over a surface to using his hips and legs to stand up at a bench and play. He started side stepping in the second week, and at the end of the third week he briefly stood up independently.

“We believe that as a result of this therapy that he will one day walk and will be able to experience the world around him in a happier and more involved way.” 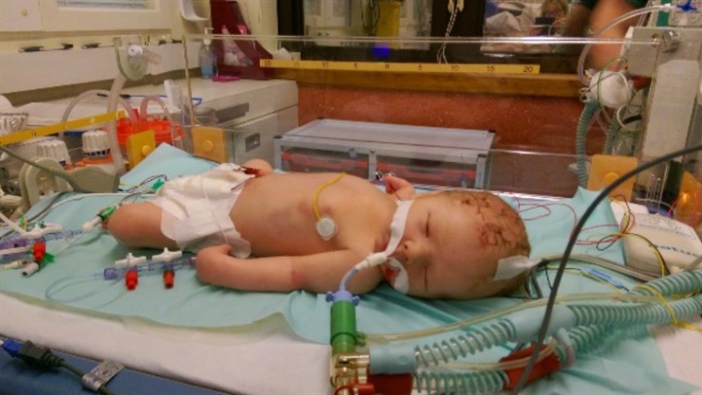 Anna will join 5,500 runners for the Simplyhealth Great North 10k when it returns to Gateshead. The event is the North East's biggest 10k and takes runners on a scenic tour of the NewcastleGateshead Quayside, passing the likes of Sage Gateshead and the Gateshead Millennium Bridge.

Participants then head up to the Gateshead International Stadium and cross the finish line on the iconic track.

Anna, who was once a keen runner, has recently taken up exercise again after taking a break when she struggled to cope with Samuel's diagnosis.

Anna, a university lecturer, added: “I decided to enter the Simplyhealth Great North 10k as I used to run quite a lot before my Samuel was born.

“After Samuel's birth I found it very difficult to get back into running, both physically after having two children but also emotionally, as the thought of having space to think whilst out running terrified me.

“I decided I should face my fears and channel some of Samuel's determination and get running again.

“Now I find that actually it is starting to help me mentally again to run. I am hoping that the 10k will motivate me and also I'll hopefully be able to raise funds for Samuel and his ongoing treatments.

“Samuel is so much more than his diagnosis, he has shown over and over that he won't give up.

“He may never lead an independent life, but we think with the right treatment he can have a life of involvement and movement that he wouldn't otherwise have.”

Entries for the Simplyhealth Great North 10k are now full. For more information about the event visit: Greatrun.org/North10k