A nurse is taking on a fundraising challenge with her colleagues in aid of her seven-month-old daughter who was diagnosed with Cystic Fibrosis when she was just weeks old.

Lyndsey Corneille, from Ashton-under-Lyne in Tameside, was left completely shocked when she gave birth to her daughter Aurora and a routine heel prick test revealed that she had Cystic Fibrosis.

The genetic disease is classed as a disability and affects a person’s breathing and digestion and can limit life expectancy.

Since she was three months old, Aurora has gone through chest physiotherapy twice a day and taken antibiotics daily to prevent damage to her lungs.

The diagnosis was a surprise to Lyndsey and her husband Gary, who had no idea they were carriers of the genes that cause the condition and expected that their baby would be completely healthy.

Although the condition has no cure and the family’s life is affected each day, Lyndsey was determined to turn Aurora’s diagnosis into a positive to help all those who have been affected by the disease.

She, along with a team of staff from the Christie NHS Foundation Trust in Manchester, decided to enter the Simplyhealth Great North Run, the world’s biggest half marathon, which takes place on Sunday 10 September.

Lyndsey and her colleagues Martha Burton and Jane McGrath, who live across Manchester and Newcastle, set up the team RorisRunners in support of Aurora.

The team of five, made up of the colleagues and also the school friends of Gary, will raise funds for the Cystic Fibrosis Trust to raise awareness in the hope of finding a cure for the disease and to support those living with it.

Lyndsey, 32, said: “Cystic Fibrosis can have a huge impact on daily life and can limit life expectancy.

“Aurora was diagnosed via the heel prick test that newborns have in the first few days after birth. “We had no idea that we were carriers of the faulty gene and it was a total shock to receive her diagnosis on my 32nd birthday when she was three weeks old.

“After giving birth to a healthy baby, it was the last thing we expected. It affects us as a family every day because since the day she was diagnosed she has been on daily antibiotics and vitamins.

“Since she was three months old, she has had chest physiotherapy twice a day.

“We send off a cough swab every two weeks and she is treated with more antibiotics if they find anything, as a preventative measure. The goal of treatment is prevention, to stop lung damage where possible, not to cure it.

“She also has monthly consultations at the Manchester Royal Children’s Hospital and my husband and I share the responsibility of her care.

“Aurora’s digestive system has not been affected by the disease so far and she is gaining weight normally because she is pancreatic sufficient.

“However this could change meaning she would need to take digestive enzymes with every meal in order to digest her food and maintain and gain weight.

“With this disease, only time can tell how well or unwell those affected will be and everyone is different. We do not know but there is a potential of a limited life expectancy as with most people affected by CF.

“After the blow of getting her diagnosis I wanted to do something positive and thought that raising awareness and fundraising for the Cystic Fibrosis Trust would be a great thing to focus on instead of worrying about what could happen.

“Raising awareness is so important because CF is not a very well known disease and therefore the CF Trust do not get as much funds for important research and services.”

Despite the difficulties thrown at her, Lyndsey says that her daughter has inspired them to be better people, with her being her usual content and happy self throughout. 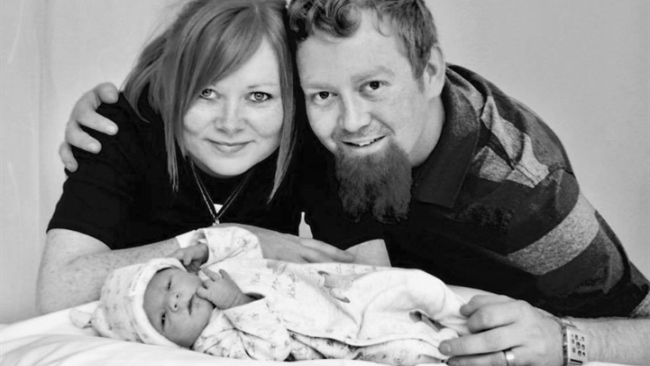 RorisRunners will join 57,000 others for the Simplyhealth Great North Run, making their way from Newcastle to South Shields, passing over the iconic Tyne Bridge and experiencing spectator support like no other.

Lyndsey, who works as a staff nurse at the Christie, added: “I want to make Aurora proud of me and be an example of how this is not something to prevent her from achieving things.

“I started training two months after giving birth after not running since early pregnancy. It has been more difficult to train for this that the last one, it isn’t easy to find the time to train, especially on broken sleep.

“Through the CF Trust I have learned about many young inspirational, highly successful sports personalities who have CF.

“It is crucial for people with CF to exercise and optimise their lung function and so, as we would have done anyway, we will ensure Aurora leads a healthy, active life style.

“We also wanted to raise awareness of the disease so that more people can understand what it means.

“Despite her diagnosis, Aurora is still a typical baby girl like any other her age.”