The Great South Run's traditional cross-Channel challenge will feature an exciting twist this year, with French runners taking on one of the oldest running clubs in England for the trophy.

Portsmouth Joggers will take on a group of runners from Caen in Normandy, which is twinned with Portsmouth, when the Great South Run returns to the city for the 26th time.

The Brittany Ferries Trophy will be awarded to the side whose runners have the fastest average finishing time when they complete the world's leading 10-mile course.

The cities of Portsmouth and Caen have been twinned since 1987, enjoying a special cultural relationship and the England v France challenge has been welcomed on both sides of the Channel.

Catherine Greenway, from Portsmouth Joggers, said: “We are so excited and proud to be a part of this challenge, and we hope we can in some small way, inspire other people to take up running and to sign up for the Great South Run this year and going into future years.

“In 2009 I plucked up the courage to join Portsmouth Joggers running club and I met wonderful people and where I felt encouraged and supported.

“I've volunteered on the Great South Run water stations for years and have always wanted to be a part of the crowd.”

"So this year, I will be taking on the challenge along with many members of Portsmouth Jogger's Club.”

25 runners from Caen in France will make the journey across the Channel to complete the Great South Run. 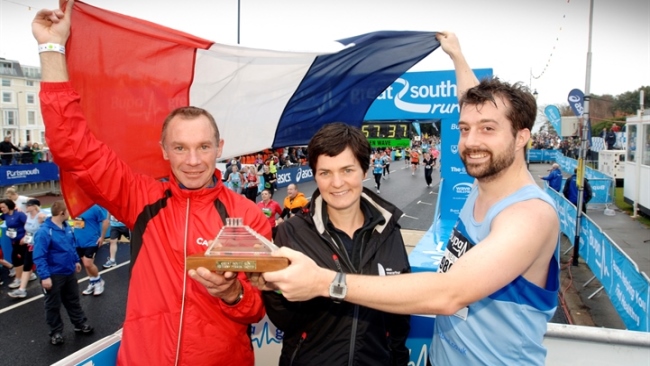 France is the current holder of the Brittany Ferries Trophy, having recorded the fastest times for the last five years.

But Portsmouth Joggers hope they can bring the cup home for England this year, with over 90 runners taking part.

Bert Shepherd, also member of Portsmouth Joggers, added: “The joggers have completed every Great South Run and in 2004 a group of us travelled to Caen to complete the D-Day run.

“It was really well organized and a good run route and we were made to feel really welcome so it will be nice to return the favour to our fellow runners.”

Christopher Jones, of Brittany Ferries, said: The Great South Run is a fantastic and unique race, attracting runners not only from around the UK but also increasingly from across the Channel.

“This year we're once again looking forward to welcoming a team of participants from Portsmouth's twin city of Caen, who will be competing with local runners to win the prestigious Brittany Ferries Trophy.

“The Anglo-French challenge is always great fun, and I'm sure the French are going to battle valiantly to ensure that the trophy stays on their side of the Channel!”

The Great South Run is the world's leading 10 mile running event and features a fast and flat course around the iconic sights of Portsmouth and Southsea.

Participants pass famous locations such as Spinnaker Tower and the Portsmouth Historic Dockyard, home to HMS Victory and HMS Warrior, before finishing on the sea front with beautiful views of the Isle of Wight.

The weekend has become a festival of sport with 25,000 people taking part across the two days, which also feature the Great South Run 5k and the Junior and Mini Great South Run.