A record number of participants of all abilities are getting their running shoes ready for this weekend's biggest ever Simplyhealth Great Birmingham 10K, including a 19-strong team from title partner, Simplyhealth, some running for Revitalise, this year's nominated charity.

The event, which will be televised live on Channel 5 from 10am, has attracted almost 8,000 sign-ups.

Runners from 23 Commonwealth nations will be representing their countries with pride at the 10K to help Birmingham in its bid to replace Durban as the host city for the 2022 Games after the South African city pulled out.

Athletics great Liz McColgan has flown in from her Qatar base to be one of the honorary starters at the 10K, before joining the thousands taking part.

Liz arrived in Birmingham early to meet some of the runners near the new Great Birmingham 10K finish line next to Millennium Point, in the city centre, on Friday.

Among them was the extraordinary fundraiser ‘Blind' Dave Heeley. The endurance athlete is marking his 60th year by taking on the Great Run series' entire 2017 events calendar, in aid of the Albion Foundation, which will be a world first for a blind pairing.

They were joined by Helen Coy; one of the 400-plus members of the University of Birmingham running team which features lecturers, students and support staff of all abilities and will have its own start wave at the 10K. 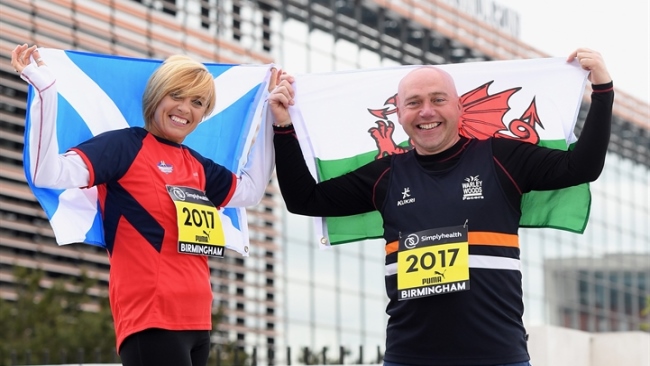 Commonwealth Runner Graham Williams, representing Wales, was also at Millennium Point to meet Liz McColgan, along with Alistair Rutherford ‘The Running Viola', who, in addition to taking part in this weekend's 10K, is attempting to break the world record for fastest finish time dressed as a musical instrument at the Birmingham International Marathon in October.

Liz McColgan said: “The Simplyhealth Great Birmingham 10K offers a wonderful opportunity for runners of all ages and abilities the chance to be part of a truly unique sporting occasion.

“The musical element to each running wave is a great innovation and I can't wait to feel the excitement and energy that a big city race provides.

“I'm also really looking forward to seeing so many runners and being cheered on by thousands of supporters through the streets of Birmingham! Having the opportunity to captain the Scotland team as part of the Commonwealth Run is the icing on the cake.”

Music will be at the heart of the Simplyhealth Great Birmingham 10K with participants given the chance to strut their stuff across the start line to the most popular tunes from the '70s, '80s, '90s or present day.

Each music start wave comes with its own party atmosphere warm-up routine featuring Birmingham's very own Urban Fitness GB, before runners, walkers or joggers of all abilities hit the streets to continue the party spirit as musicians and bands line the route through Birmingham.

The PKF Cooper Parry Business Challenge will see 30 companies from across the Midlands competing for fastest-time trophies and all-important business bragging rights.

And teams representing some of the biggest names in Midlands football, including Aston Villa, West Bromwich Albion and Birmingham City, will be battling it out for the Ding Dong Derby Cup.

The women's race features England's Gemma Steel, who will face stiff opposition from the Kenyan duo of Violah Jepchumba and Lucy Cheruiyot in a mainly domestic-based field.

Fifty new runners will be taking on this year's Simplyhealth Great Birmingham 10K as part of a city-wide project helping inactive people to improve their health.

The first-time runners will be on the 10K start line thanks to support and training from RunBirmingham; a joint initiative between the city council, Sport England, England Athletics and the Great Run Company, organisers of the Great Birmingham 10K.