To take part in the Simplyhealth Great East Run for a nominated charity, click here

Participants of the inaugural Simplyhealth Great East Run raised a huge £1m for charitable causes in 2017.

A quarter of those taking part in the half marathon event opted to raise money for charity, benefitting good causes across Suffolk and beyond.

Runners and charity fundraisers gathered at Ipswich Waterfront to unveil the total figure raised and to officially launch this year's event, which will return to Ipswich on Sunday 16 September.

Clare Jackson, from Diss, took part in the 2017 event for Blossom with a group of fundraisers in the hope of raising awareness about the charity's support network that helps women in the area to make a positive change in their lives.

This year she will join a team of trustees from the charity who aim to get under the two hour mark.

Clare said: "Taking part in the inaugural Simplyhealth Great East Run was an amazing experience to be able to challenge myself and support a charity that is so important to hundreds of other women in the region.

"It was a fantastic opportunity to challenge yourself, make new friends, get fitter and participate in a great motivational event and celebrate everything that is great about the county.

"It was fantastic to be able to raise so much money for a cause that is close to all of our hearts. We are aiming for an even bigger team in 2018 and all of the trustees are setting a challenge to complete the event in two hours." 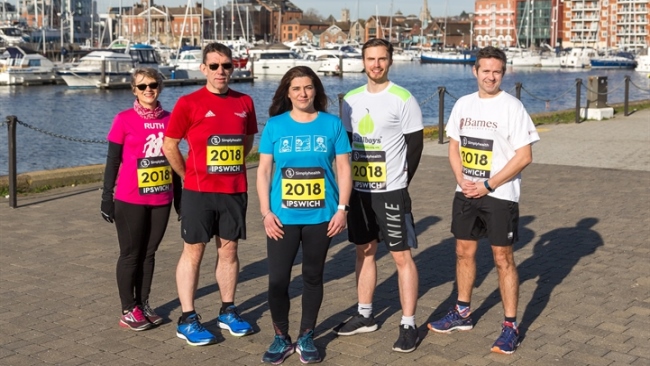 Ruth was diagnosed with breast cancer in 2015 and was left feeling mentally and physically drained following rounds of chemotherapy and radiotherapy.

Following her treatment, she signed up for event last year as part of the council's Outreach Programme as a complete novice, hoping to complete a challenge by the end of the year.

She has signed up for the 2018 event and will join her husband on the start line so they can run together this year.

Ruth said: "I found out I had breast cancer in 2015 and had to go through surgery, chemotherapy and radiotherapy which left me feeling very low.

"Going through something like that made me rethink my life and I wanted to do something that challenged me.

"I started volunteering as a marshal at Great Run Local in Needham Market and I made it my aim to take part in a 5k run there.

"When I found out the Simplyhealth Great East Run was taking place and there was an opportunity for inactive people to be supported I did the unthinkable and signed up.

"My teammates and coaches kept me going. I trained and finished very nearly last but I earned my medal and I cannot wait to do it again this year."

Demand for the 2018 event has been extremely high, with less than 1,000 places remaining.

The half marathon event will start and finish in Ipswich town centre and will follow the same popular route as last year, with runners experiencing the satisfaction of completing a 13.1 mile challenge with thousands of others.

3,500 participants will line up on the start line on Russel Road this autumn, whatever their pace or motivation for running. Runners will experience a running event like no other in East Anglia, with unrivalled local support as they take in the sights and celebrate everything that's great about Suffolk.

Over ten charities have already agreed to be a part of the event this year, including Cancer Research UK, the Stroke Association, East Anglia Children's Hospices and Unique.

Giles Macrow, from Newmarket, is has signed up to take on the Simplyhealth Great East Run for the first time this year, as part of his year of fundraising for Cancer Research. 50-year old Giles has lost a huge 11 stone since 2016 after taking up running to combat his depression and poor health.

He said: "In 2015 I weighed over 24 stone, had dangerously high blood pressure as well as depression and anxiety.

"I was in very poor health and my vision was beginning to deteriorate, I just knew something had to change.

"That year I took up running and joined Slimming World as a challenge to myself and in just over a year I managed to lose 11 stone after building up my running and setting myself further distance goals.

"I am now taking on my first marathon this year, now weighing 13 stone and I am also running the Simplyhealth Great East Run where I am raising money for Cancer Research.

"Raising money for charity has always been very important to me and it has kept my motivation high when I have taken on 10ks, stair climbs and other challenges that I never thought I'd be able to do when I was so overweight."

Event organisers and their partners Suffolk County Council, Ipswich Borough Council and Ipswich JAFFA Running Club, took the already established Ipswich Half Marathon event to the next level with a closed road course, taking in some of the region's most iconic sights.

"Mass participation events such as the Simplyhealth Great East Run, deliver numerous benefits for Suffolk and I am delighted that this also includes our local charities."

Participants of the event head out from Russell Road, passing the prestigious Willis building in Ipswich city centre before heading towards the town's vibrant waterfront, which was one of the most popular spots for spectator support last year.

The route then goes past Felaw Maltings on the way out and back along Wherstead Road, where participants will pass twice under the Orwell Bridge.

On returning to Ipswich town centre, runners pass over the Wet Dock lock gates and continue along the waterfront for a second time before crossing the finish line in Ipswich Town FC's complex.

To take part in the Simplyhealth Great East Run for a nominated charity, click here