A man who was diagnosed with testicular cancer and ran the Simplyhealth Great Manchester Run while undergoing treatment is set to return to the event this year now that he is in remission.

Shaun Carroll, from Stockport, was diagnosed with testicular cancer at the end of 2017. Following his diagnosis, he underwent surgery to remove one of his testicles.

He then began training for the 2018 Simplyhealth Great Manchester Run, despite still going through aftercare appointments from his surgery. Just two weeks after the run last May, during one of his appointments he was given the bad news that the cancer had spread to a lymph node in his stomach.

He then went through nine weeks of chemotherapy at the Christie in Manchester, which included overnight stays at the complex. During this time he was admitted to hospital twice due to the side effects of the treatment.

Following the chemotherapy, Shaun became inspired to want to fundraise for the Christie charity after the level of care that he received there. This year, he aims to return to the Simplyhealth Great Manchester Run on Sunday 19 May to raise money for the Christie and run under an hour, which he has never achieved before.

Shaun, 35, said: "At the back end of 2017 I was diagnosed with testicular cancer to which I had an radical inguinal orchiectomy, meaning the affected testical was removed but with a little aftercare and follow up appointments I was well on the road to recovery.

“I trained for the 2018 Simplyhealth Great Manchester Run, and just like the year before I ran it but this time something felt different, I still can't explain why but it was different.

“I had a follow up appointment at the Christie just two weeks after the run, during this appointment I was told that unfortunately the cancer had spread to a lymph node in my stomach and chemotherapy was needed. This would be done over nine weeks which included overnight stays at Christie as well as outpatient day sessions. During this time I was also taken into hospital on two occasions with illness linked to the chemotherapy

“As part of my treat for testicular cancer I was referred to the Christie by the Urology department at Stepping Hill after my operation. Here I had all my scans and tests. The chemotherapy itself left me so sick to the point where I wasn't interested in food and slept for long hours, once leaving the hospital it would take days to get my appetite back and the more the treatment went on the harder it was to just function.

“It seemed you would just about becoming able to operate again when you're cycle finished and it was time to go back in and start again. “ I was inspired to run so I could give something back to The Christie. It's a great way to raise money for the place that got me through everything thrown at me.

“It's also helped inspire my family and colleagues to run which is great for not only the charity but getting and keeping us all fit and healthy.” 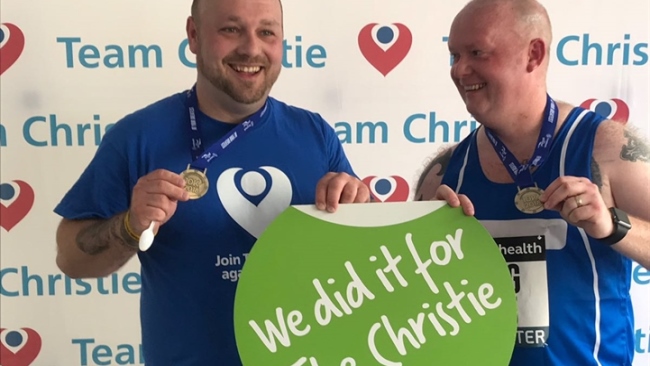 The Christie is among over one hundred charities that will be represented on the Simplyhealth Great Manchester Run start line on Sunday 19 May. 30,000 people take on an incredible day of sport in the city, which features a 10k, half marathon and junior and mini distance in Manchester city centre.

The dad of two added: “I have a personal battle with this event, this will be the third time I've taken part and I'm still trying to achieve a sub 1 hour time.

“I think the event itself is second to none and a fantastic way to raise money for charity, it's a well known and recognised run which I believe gives you a great opportunity to raise as much as you can.”