THOUSANDS of runners pounded the pavements of England’s second city as Birmingham celebrated its greatest weekend of running.

Olympian Andy Vernon took victory in the half marathon ahead of last year’s winner Chris Thompson, on a weekend where almost 20,000 people took part in a range of events in the city centre.

The event comprised a half marathon alongside Junior and Mini events ensuring that there was something for everybody regardless of age or ability.

The half marathon took in an iconic route which included Birmingham sights such as the Bullring, Cadbury World in Bournville and Edgbaston cricket ground.

The 30-year-old Olympian broke Thompson, 2015’s winner in dramatic circumstances, at the eight-mile mark and made light work of the victory, clocking 63.32, with Thompson 20 seconds behind with a time of 63.54.

It marked an Aldershot Farnham and District AC one-two finish, with Belgian Koen Naert 30 seconds behind in 64.24.

It was Vernon’s first half marathon since the Great North Run in 2014, with the European 10,000m silver medallist looking in fine condition following his appearance at the Olympic Games in Rio de Janeiro over the summer.

Elizeba Cherono took the victory in the women’s race, the Dutchwoman easing home in 73.42 to finish more than a minute ahead of Romania’s Madelina Florea who clocked 74.45 and Briton Lauren Deadman in 74.54.

Meanwhile, celebrities from the screen and stage turned out in force, with presenter and fitness author Nell McAndrew taking part. Emmerdale’s Chris Chittell, who plays Eric Pollard, supported the event whilst Casualty’s George Rainsford also took part. Free Radio presenter Gemma Hill was joined by Olympic diver Leon Taylor, while Gary Poulton, a contestant on 2015’s The Apprentice, returned to the city having completed the Great Birmingham 10K in May. 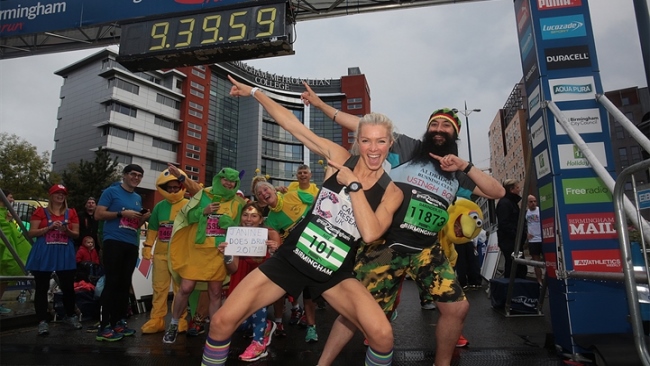 As ever, there was a strong contingent of charity runners raising vital funds for good causes with the nearby Birmingham Children’s Hospital having entered a team of 1,000 runners.

And hundreds of our runners of the future took part in the Mini and Junior Great Birmingham Run events on a 1.5k and 2.5k course on Broad Street.

The event signals a year to go until the inaugural Birmingham International Marathon, which will take place alongside the Great Birmingham Run on October 15, 2017. Entries are open for the 26.2 mile event with an encouraging response from runners so far.

Great Run Company Communications Director David Hart said: “We’re delighted that the Great Birmingham Run was a success once again. It is heartening to see so many runners who have trained for the event raising thousands of pounds for good causes.