A popular Take That tribute band are to take on the Simplyhealth Great North Run with a super fan as part of their campaign to raise money for a local North East charity during the group’s 25th Anniversary year.

Re-Take That, made up of Paul Waite and Peter Waite, from Washington, and Ros Petty, from Birtley, will run the world’s biggest half marathon in character to raise money for Tiny Lives Trust.

They will be joined by Victoria Hastings, from Newcastle, who is the brains behind an ambitious fundraising concert Take That Back To Where It All Began, that will take place in Newcastle’s City Hall on 2 November, 25 years to the date of the band’s first ever concert there.

Victoria was at the concert in 1992 and instantly became obsessed with Take That and spent the following years attending every single concert that she possibly could.

She was inspired to organise the anniversary concert after watching Gary Barlow before there and managed to get Re-Take That to agree to perform and support the charity, which is based at Newcastle’s Royal Victoria Infirmary.

The Re-Take That members were so keen to support the fundraiser; they suggested that they also sign up to run the iconic Simplyhealth Great North Run, which takes place on Sunday 10 September.

Paul Waite, 37, who is the band’s Gary Barlow, said: “We are loving being part of this massive campaign and raising money for Tiny Lives Trust.

“Everyone in the team have young children and we wanted to make a difference to one of the smaller charities and Tiny Lives Trust really struck a chord with us.

“When we first met Victoria we loved her idea and passion to make a fortune for this charity. Training to be able to do 13.1miles is fun, but it’s very hard!

“The campaign has turned into something massive and Take That themselves are even aware of it.

“We’ll be running in character and it will be extra special to have Victoria running with us on the day, in aid of a cause that is really close to her heart.”

Victoria, 37, added: “When Take That’s first ever tour was announced, I was lucky enough to get tickets and the opening night was at the City Hall.

“That night was so magical and something happened where I just knew that I had to be a part of every tour that they would ever go on to do.

“I went to watch Gary Barlow perform on his own at the same venue a few years ago and I kept thinking how amazing it would be to get them all back here for the 25th Anniversary.

“I couldn’t stop thinking about the idea and after seeing Gary’s musical The Girls, the theme behind never giving up inspired me to go out and book City Hall and turn it into a Take That tribute night.

“Through determination I managed to get Re-Take that to agree to perform there.

“They were blown away by my enthusiasm and they suggested that we all do the Simplyhealth Great North Run together to get even more movement behind the fundraising.

The group decided to support Tiny Lives Trust because one of Victoria’s friends used the special care baby unit at the RVI a few years ago.

Victoria also used the hospital’s pediatric services when her baby boy Harry fell ill at just a few months old and wanted to repay the charity that support babies who are born sick or born too soon. 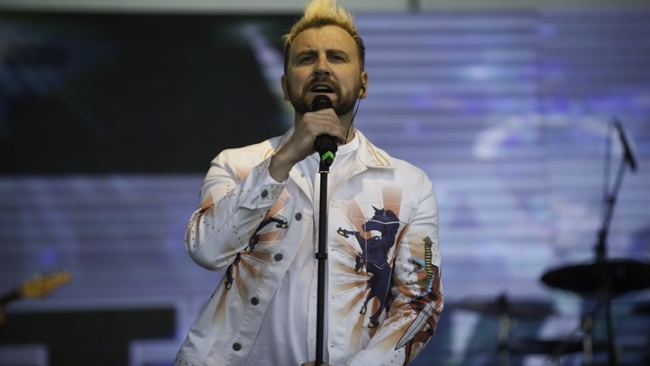 They will join 57,000 others for the Simplyhealth Great North Run, making their way from Newcastle to South Shields, passing over the iconic Tyne Bridge and experiencing spectator support like no other.

Victoria added: “I think Tiny Lives is a charity that doesn’t get much coverage and we thought that running for a local charity meant that our campaign could really make a difference.

“There is a massive campaign on social media to get Take That themselves to make an appearance. We have all our fingers crossed that it will be a night to remember.”

For more information about Take That Back To Where It All Began, visit takethatbacktowhereitallbegan.com