Local independent stroke support charity, Bristol After Stroke, has put together a team of runners for this year’s Simplyhealth Great Bristol 10K in memory of regular service user and volunteer, Len Osgood.

Inspiring fundraiser Len ran the 2018 Simplyhealth Great Bristol 10K just one day before undergoing chemotherapy for the cancer that eventually claimed his life.

Len came to the charity in 2015 as he struggled to come to terms with the impact the stroke had had on him.

Before his stroke, Len was fit and healthy and took part in running events and following his illness, he battled with the physical restrictions and suffered from depression.

With support from the centre’s Stroke Support Coordinator team and the ACTion after Stroke short course to learn about the emotional impact of a stroke, Len’s mental health improved, he became a regular volunteer at the Stroke Café in Downend and a speaker at events where he wanted to share his experience with others.

Last year, he was then dealt a devastating cancer diagnosis blow, but was determined to undertake the 10k challenge to raise money for Bristol After Stroke.

With the agreement of his doctors, he postponed chemotherapy until the day after the event. Supported by his son, David, and fellow stroke survivor and Bristol After Stroke volunteer, Lizzie, he made it round the course and raised over £1000 for the charity.

This year, Len’s son David will join a team of 11 volunteers, service users and supporters from Bristol After Stroke to run the city centre 10k on Sunday 5 May in his father’s memory.

David said: “We, as a family, really appreciate the support Bristol After Stroke gave to Dad after his stroke, especially with the depression side of it, they helped him greatly.

“Dad was determined to complete the event last year, despite going through such a hard time, which just shows what the charity meant to him.

“I was by his side the entire way, we were one of the final finishers but he was determined to make it to the finish line.”

The Simplyhealth Great Bristol 10k features 13,000 runners who take on the challenge of a 10k that starts in the city centre, heading out under the Avon Gorge and travelling under Clifton Suspension Bridge.

Runners then travel back into the city centre to achieve their goal near to Millennium Square, which provides the perfect celebratory backdrop with cafes, bars and restaurants. 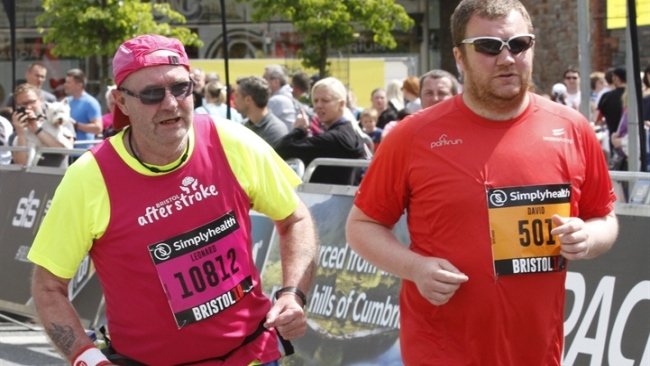 Len was a fabulous friend, volunteer, fundraiser and ambassador for Bristol After Stroke and he is much missed.

“Len’s inspirational story illustrates perfectly the way in which Bristol After Stroke supports people to recover both physically and mentally after a stroke.

“So this year we felt we wanted to run in tribute and in memory of Len and to raise funds for our charity which was such an important part of Len’s life.”

Another core member of the Bristol After Stroke 10k team is Jerry Daly. Jerry had a stroke nearly ten years ago and was very badly affected by aphasia – a communications disability and common lasting effect of stroke.

He came to Bristol After Stroke after some years of being unable to speak and joined the charity’s aphasia support programme. Although still a man of few words, Jerry now volunteers regularly at one of the weekly Stroke Support Groups – giving something back.

You can find out more about Len’s and Jerry’s stories, and how to support Bristol After Stroke