The 2023 AJ Bell Great Birmingham Run takes in the best of Brum with thousands of runners passing popular landmarks across the city centre and green spaces in the south and suburbs. We’ve picked ten scenic spots on the 10k and half marathon route for you to enjoy as a spectator or runner.

Surrounded by the Library of Birmingham, the Rep theatre, Symphony Hall and The Exchange building among others, Centenary Square is the heart of Birmingham’s civic and tourist area. It’s here that Brummie Bull pulled in visitors by the thousand during the Birmingham 2022 Commonwealth Games, all keen to grab a selfie with the city’s new superstar! It’s also here that thousands of runners will line up on Broad Street for the 10k and half marathon before setting off on a running tour of the city… 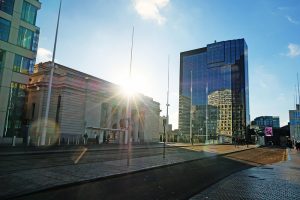 An instantly recognisable landmark for the Jewellery Quarter – A World Heritage site – the Chamberlain Clock sits at the junction between Warstone Lane, Vyse Street and Frederick Street.
First unveiled in 1903, the Clock commemorates Birmingham Mayor Joseph Chamberlain’s visit to South Africa following the end of the Boer War. A recent £150,000 restoration of the clock means it now chimes on the hour and connects visitors more with the local area and background on Chamberlain. 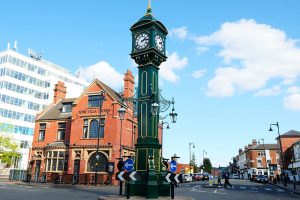 Another Jewellery Quarter favourite that is pretty as a picture at any time of year, St Paul’s Square is the last remaining Georgian Square in Birmingham, and is named after the church at its centre. Many of the former jewellery workshops and small factories surrounding the square are now Grade II listed and home to bars, restaurants and creative businesses reflecting a new era for the JQ. 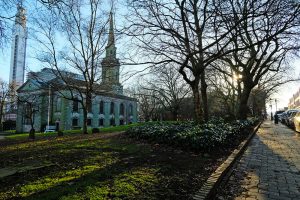 The Mailbox and canals

A former vast Royal Mail sorting office, The Mailbox is recognised as one of Birmingham’s premier shopping and dining destinations with a bright-red frontage facing the city centre and the canalside rear of the building providing food and drink to cater for tastes from across the world. Near the Mailbox is one of the prettiest urban walks in the country at Gas Street Basin, known as the heart of the UK’s canal network.

The rebuilt shopping centre above New Street station is called Grand Central and has one of the most eye-catching exteriors in Birmingham architecture. It’s something to reflect upon! The new building dates back to 2015 and was recently home to a huge John Lewis, which will soon be redeveloped as The Drum co-workspace, offices, restaurants and more.

The Southside area of Birmingham is the city at its most colourful and diverse. Home to bars and restaurants near The Hippodrome – one of the country’s most visited theatres – and the city’s Chinatown, Southside is a wonderfully colourful district. Half-marathon runners will take in streets at nearby Digbeth, itself an eclectic mix of factories and warehouses now rubbing shoulders with creative businesses, coffee shops and entrepreneurs helping to reshape this historic part of town.

As half marathon runners stretch their legs through south Birmingham they will track the A441 Pershore Road, a busy commuter route, before reaching Selly Park near Stirchley and a return back to town. Selly Park is home to students and academics from the University of Birmingham who will no doubt be out in large numbers taking on the city’s half marathon and running their home streets.

Did you know that Birmingham is one of the greenest cities in Europe? Lovely Cannon Hill Park is the most popular example of the city’s glorious green spaces with a beautiful lake, flower beds, mini golf, sports courts and the MAC cultural centre, cinema and cafe. Remarkably, this beautiful plot of land in Edgbaston was a gift to the city from a wealthy Victorian philanthropist – Louisa Ryland – who understood the importance of the great outdoors to the booming industrial city. Runners can be spotted half marathon training all year round at Cannon Hill Park and we can’t wait to see them pushing for their personal bests on Sunday, 7 May. 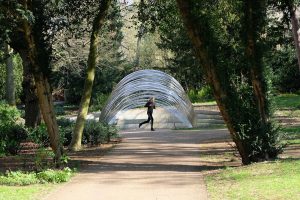 Another half marathon route highlight is world-famous Edgbaston Stadium, the first English ground outside Lord’s to host a major international one-day tournament final when it hosted the ICC Trophy final in 2013. It’s the fourth-largest cricketing venue in England, after Lord’s, Old Trafford and The Oval. Fans love it for the incredible atmosphere and fancy dress whenever England are playing here.

The former site of the city’s wholesale markets, Smithfield will soon be home to new stores, cultural sites, hotels and public spaces. It’s one of the largest regeneration sites in Europe and will connect nearby Bullring and St Martin’s to Southside and Digbeth in new and exciting ways. St Martin’s and the Bull Ring is one of Birmingham’s oldest areas and has been an important part of Brum since Medieval times. It is believed The Bull Ring market may have originated with the charter granted in 1166 by Henry II to the lord of the manor, Peter de Birmingham.

We’ll see you there on Sunday, May 7th!

Find our more, or sign up for the AJ Bell Great Birmingham Run here.