Inspirational runner Dawn Nisbet has unveiled her latest challenge – taking on her first-ever half marathon at the Simplyhealth Great Manchester Run in May.

Dawn, whose picture went viral last year when she was photographed finishing last in a local 5K running event, has gone on to become an inspirational figure in the running community.

Having recently set up the motivational peer group Bee Awesome, she was joined by some of the runners at Piccadilly Place in Manchester to announce the next step in her journey.

Thinking of taking up running for the first time this year? ??@DNisbet1808 shares her tips if you're not sure where to start. ??
Read Dawn's story ?? https://t.co/drAvoeUru2 pic.twitter.com/t15B4iagAD

Mum of two Dawn, from Oldham, took part in the Simplyhealth Great Manchester Run 10K last year, but has announced plans to start training for the half marathon distance at the popular city centre event on Sunday 20 May.

She will champion a group of runners, who will support each other through either the 10K or the half marathon.

The 42-year-old said: “In 2017, having done my first 10k at the Simplyhealth Great Manchester Run and subsequently completing two more 10k runs, I finally realised how determined I am and that I can achieve most things I set my heart on.

“A friend of mine wanted to do her first half marathon for her 60th birthday and we thought it would be great fun to take on the challenge together.

“I also realised there are lots of people out there like me that with a bit of support, encouragement and team work would love to take on this kind of challenge. So Bee-Awesome was born.

“Like minded people supporting each other to take on this epic undertaking, with a focus on fun and friendship, finish lines not finish times.”

Dawn was joined by a group of runners including 38-year-old Jeanette Mitchell, who will be taking part in her first half marathon at the Simplyhealth Great Manchester Run in May.

Jeanette, from Hadfield in High Peak, said: “I ended up doing ten 10ks last year and loved them. One of them was, of course, the Simplyhealth Great Manchester Run 10K, and I think it was only the second one I had done.

“When I decided that I was going to give a half a go, it seemed the logical choice to go for the Simplyhealth Great Manchester Run – it was a no-brainer really. 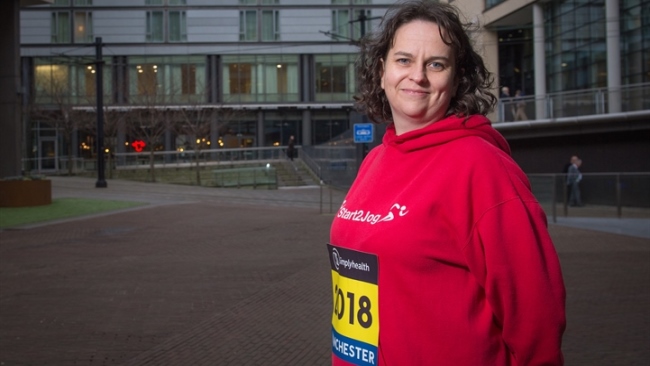 “I will be running for The Christie again and I can't wait.”

The Simplyhealth Great Manchester Run will see thousands of people raise money for a host of good causes, with the streets of Manchester taken over for a running party in the city.

Jackie Pratt from Broadbottom, in Hyde, has already taken on a number of 10Ks and a half marathon and is looking forward to the 13.1mile event at the Simplyhealth Great Manchester Run, where she will run for local charity Reuben's Retreat.

The 37-year-old said: “I never considered myself a runner but five years ago I was challenged to do the Great Manchester Run 10K in memory of Reuben Graham and since then have firmly got the running bug. 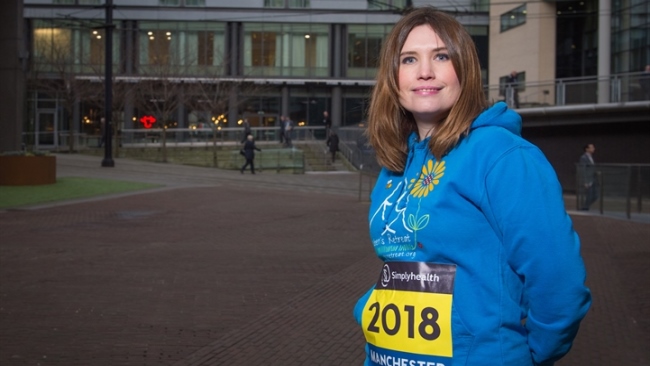 “Reuben's mum Nicola Graham is a good friend of mine and this is a way I feel I can do something to support the charity. I love running in my blue ‘Reuben' shirt as there is such a feeling of support and commitment to this local charity at the Simplyhealth Great Manchester Run.

“We have an informal ‘running group' in Broadbottom where five like-minded mums get out running twice a week for fitness, our emotional wellbeing and friendship – all five of us will be running the half marathon with a motto of ‘start together, finish together'.”

Stalybridge 30-year-old Lorna Krisson is a first-time runner and is looking forward to her first running event in May.

She said: “I've never completed any sort of run before and have contemplated it for many years without doing anything about it. So I have jumped right in the deep end and signed up to do the half marathon. 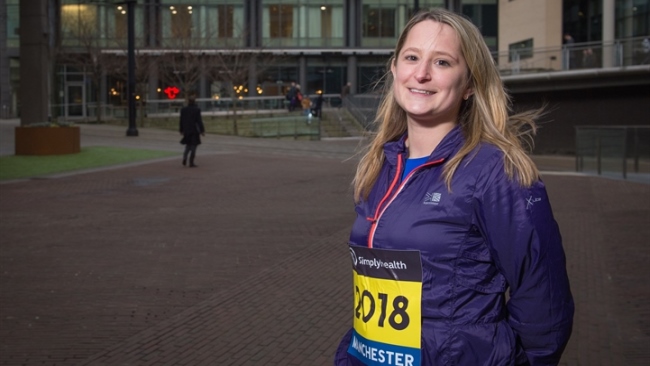 “I enjoy running, it is great for clearing the head and keeping fit. 2017 was a year full of mixed emotions; with great highs but also some lows with sadly losing relatives and close friends.

“I'm dedicating my run to all those important to me and my half marathon ‘challenge' represents the challenges of what people go through daily. I'm extremely lucky to be part of a great group of supportive individuals with Dawn as our champion that anything is possible with a little self-belief.”

The Simplyhealth Great Manchester Run start line is known for its buzzing atmosphere, with an energetic warm up and Manchester anthems booming from the speakers along Portland Street.

This year the half marathon runners will set off in waves to ease congestion, and for the first time runners will use both carriageways of Mancunian Way; one side as they approach the east of the city and the other side as they return towards the west.

The course will provide plenty of atmosphere with bands on the run, charity cheer points, musical entertainment and thousands of spectators, before finishing on Deansgate alongside Beetham Tower.