Wolverhampton Wanderers and the Express & Star are teaming up to recruit a ‘Wolf Pack’ to take part in the Simplyhealth Great Birmingham Run for Cure Leukaemia in support of goalkeeper Carl Ikeme who recently announced he is in full remission.

It is over 12 months since the Nigerian International goalkeeper, who has played for Wolves since 2003, was diagnosed with acute leukaemia. The news of his diagnosis shocked the entire football community and the club, its fans and the Express & Star immediately rallied in support of the shot stopper. Wolves approached Cure Leukaemia to be the focal point for all the fundraising and over £110,000 was raised in 2017 by the Wolves family.

The staff and fans have continued this support into 2018 and to date, £142,000 has been raised for Cure Leukaemia. Now, following Carl’s announcement that his leukaemia is in remission and that he is retiring from the game, the club, fans and Express & Star are keen to show their support once again by assembling a huge team of runners for the Simplyhealth Great Birmingham Run on Sunday October 14th 2018.

Laura Cahill, who is a Ticket Office Sales Advisor at the Club, has already signed up for Cure Leukaemia and is delighted to front the team. She said: “I have always been a keen runner and I am really excited to be taking part in the Simplyhealth Great Birmingham Run for Cure Leukaemia in support of Carl. We are all delighted that he is in remission and I hope we can recruit a massive team to continue to show our support for him. The Wolves family has shown how we can unite and make a real difference and I hope that we can do again this summer.” 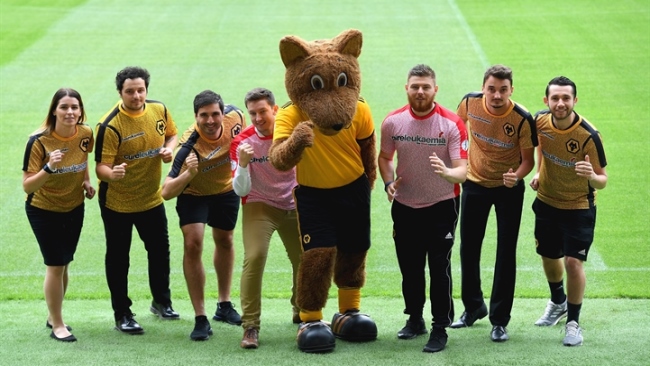 Express & Star digital sport editor Nathan Judah ran the Disney Dopey Challenge for Cure Leukaemia at the turn of the year, raising nearly £4,000 in support of Carl, and he has signed up to run again for the charity this October. He said: “Everyone is thrilled that Carl is now in remission for leukaemia and I am excited to help recruit runners for Cure Leukaemia to further emphasise our support for Carl. When I presented Cure Leukaemia with the funds I raised from the Dopey Challenge earlier this year it was inspiring to hear how every penny will go towards directly helping patients like Carl. I am sure that with Wolves and the Express & Star backing this campaign we can assemble a huge ‘Wolf Pack’ to take on the Simplyhealth Great Birmingham Run and I’m excited to get started!”

Cure Leukaemia’s CEO James McLaughlin said: “We were all thrilled to hear the news about Carl and I am sure that the extraordinary support he has had from the Wolves family over the last 12 months has helped him fight this horrible disease. The Wolves fans have already raised close to £150,000 for Cure Leukaemia in support of Carl and we are delighted that Laura and Nathan are looking to assemble a ‘Wolf Pack’ for the Simplyhealth Great Birmingham Run. I am sure the region, which has already been so generous, will back this campaign and fill the streets on October 14th.”

Cure Leukaemia provide free entry to the Simplyhealth Great Birmingham Run and a free high performance running shirt in return for a minimum of £299 in sponsorship funds raised by each runner. If you would like to take part as a member of the ‘Cure Leukaemia Wolf Pack’ email beinspired@cureleukaemia.co.uk and state you would like to be in the Wolves team in your email.