Anyone who entered the 10k will receive a £10 discount for either the Simplyhealth Great Birmingham Run half marathon or Birmingham International Marathon.

WOLVES are officially the whizzkids of West Midlands football – after racing to Ding Dong Derby Cup success at the Simplyhealth Great Birmingham 10k.

Boardman posted the fastest time of all the football clubs' runners, with a fleet-footed 35:56mins placing him 38th out of a record 8,000-plus entrants in the overall event standings.

“We are immensely proud to win the Ding Dong Derby Cup,” beamed Hayward, who lined up with his victorious team-mates to lift the silverware pitchside before Wolves' final EFL Championship game of the season against Preston yesterday.

“We came a close second to Blues last year which really spurred us on this time around. We were determined to win the trophy for Wolves!

"We knew with all the preparation we had put in, if things went according to plan on the day, with no major hiccups, it was there for us.

"The event itself was superbly organised from start to finish, right down to the stewarding and the guys manning the water stations. No stone was left unturned by the Great Run Company.

“Having done plenty of these types of events over the years, we really feel that the Great Birmingham 10k will continue to grow in stature and become one of the key events on the UK's 10k landscape.

"It was a really fun day out for us and we look forward to defending our title next year!' 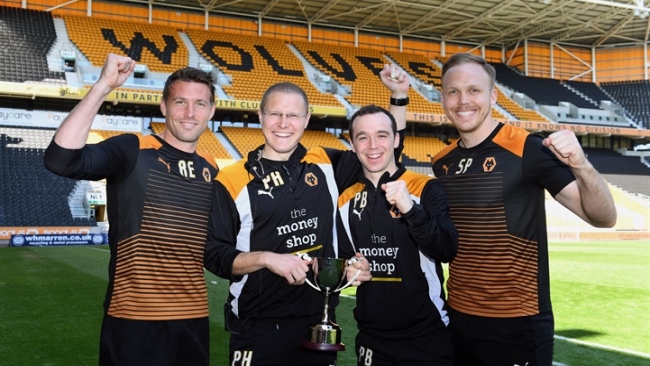 The second Ding Dong Derby Cup pitted teams comprising at least four runners against each other.

Football clubs across the region, from Premier League down to grassroots level, were invited to enter.

The four fastest times posted by each team were accumulated to determine who was the fittest and fastest club – with Wolves securing the ultimate derby bragging rights.

The Ding Dong Derby Cup gets its name from a phrase made famous by much-loved West Midlands broadcaster Tom Ross in describing local affairs down the years.

David Hart, Communications Director at The Great Run Company, said: “It was another closely-fought contest and I want to thank all the clubs who entered running teams and produced such fantastic times.

“Wolves emerged as worthy winners and can rightly lay claim to being the quickest club on the patch.”

Anyone who entered the 10k will receive a £10 discount for either the Simplyhealth Great Birmingham Run half marathon or Birmingham International Marathon.