The Simplyhealth Great East Run will return to Ipswich in 2019 on Sunday 22 September and entries are now open.

The hugely popular event, which has sold out months ahead of the event each year, will offer 4,000 places due to high demand.

The half marathon event, which returns to Suffolk for the third successive year, will once again start and finish in Ipswich town centre.

The 4,000 participants will follow the same popular route as previous years, lining up on Russell Road and heading out into the scenic Suffolk countryside, passing under the Orwell Bridge twice.

On returning to the town centre, they have the unique opportunity to finish inside Ipswich Town Football Club’s practice pitch area. 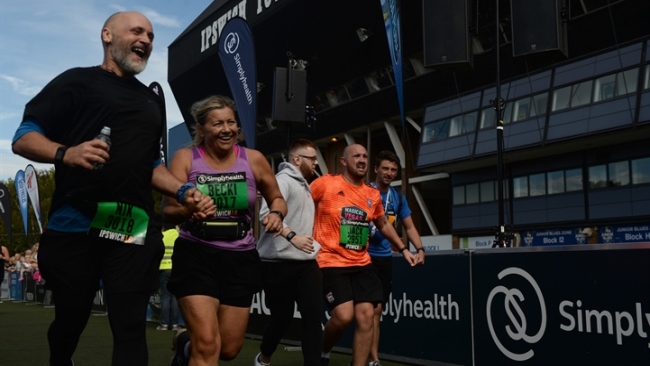 Since 2017, the Simplyhealth Great East Run has grown in size and has almost doubled to 4,000 runners over the three years.

Each year, the event has reached capacity within a matter of months, with thousands of people signing up to take on the half marathon challenge in the Autumn.

The event is popular with runners of all abilities, from those taking on a half marathon for the first time, to charity fundraisers and a competitive club runner field with some of East Anglia’s best runners.

It’s also popular with spectators and supporters, with Portman Road and Alderman Road playing host to a vibrant event village packed with sponsors and charities, as well as a local farmer’s market from Suffolk Market Events.

Nigel Gough, of The Great Run Company, said: “We’re really excited to be able to bring the Simplyhealth Great East Run back to Ipswich for the third consecutive year and to allow 4,000 runners to be a part of a fantastic half marathon in Suffolk.

“Every year, the event receives a huge level of demand for entries, selling out within a matter of months, so I would encourage anyone who wishes to sign up to do so as soon as they can to avoid disappointment.”

Participants of the Simplyhealth Great East Run line up next to Suffolk County Council’s Endeavour House and head out through the centre of Ipswich, passing the prestigious Willis building designed by Lord Foster before heading towards the waterfront.

The route then goes past Felaw Maltings on the way out and back along Wherstead Road, where participants will pass under the iconic Orwell Bridge.

Runners then head through the village of Freston and return under the bridge, passing the likes of Suffolk Food Hall and Fox’s Marina.

Participants then head back into the town centre, next to Ipswich Town’s Portman Road Stadium before crossing the finish line in the practice pitch area.

Partners are confident that the success of the Simplyhealth Great East Run will continue to raise East Anglia’s profile as a tourism destination for both runners and spectators across the U.K.

The event is also part of Suffolk County Council’s aim to be the most active county in England.

Councillor James Reeder, Cabinet Member for Health at Suffolk County Council, said: “Running is one of the most accessible forms of physical activity and we know that mass participation events such as the Simplyhealth Great East Run can inspire people to get active and help us to achieve our ambition to make Suffolk the most active county in England.

“The event also makes a very positive contribution to the local economy and tourism sector, attracting participants from across the UK to visit and stay in the county, whilst raising thousands of pounds for charitable good causes.”

Councillor Bryony Rudkin, Ipswich Borough Council Deputy Leader, said: “The Simplyhealth Great East Run, which has grown out of our Ipswich Half Marathon, has become a welcome addition to the town’s events calendar and is extremely popular among people of all abilities.

“We wish all the participants well and hope many more will cheer them on.”

“Our running club is built on an ethos of inclusivity, embracing runners of all abilities. The run has proved itself as an excellent local event which has something to offer participants of all abilities, as well as an entertaining spectator experience.”