Ray Scott, the Great North Run volunteer who chaperones celebrities around the 13.1-mile course, has challenged North-East stars Cheryl Fernandez-Versini and Ant and Dec to sign up for this year's event as he looks forward to his 36th outing on the streets of Tyneside.

Ray has taken part in every single Great North Run since its inception in 1981, and has ushered the stellar names in sport and showbusiness from Newcastle to South Shields since 1989, including John Motson, Daley Thompson and Steve Redgrave.

And with the event set to be as popular as ever this September, Ray is hoping that some of the North-East's stars get involved in the world's biggest half-marathon and join the party.

“I think it would be great if someone like Cheryl or Ant and Dec do it this year,” said Ray, who was inducted into the Great North Run Hall of Fame in 2009. “A few big local celebrities could run it, I would love that.

Ray Scott, who was inducted into the Great North Run Hall Of Fame in 2009

“We had Ant and Dec starting it a few years ago, but if they fancied running it, it would be an honour to join them.”

Ray is part of a team of 25 chaperones who assist celebrity runners at the event, which takes place on September 11 this year, and enjoys his part in the proceedings.

“Nobody's bothered about their finishing times,” said Ray of the chaperones, who are recruited from local running clubs. “They're all there to do a job. It's actually a good day out for them as well. They enjoy it, they meet celebrities and get to go in the hospitality tent. It's a good day out for everybody.

“We wear special vests and shorts, so people who have been to see the Great North Run before will recognise that we run with celebrities. What people don't always see is the reaction the celebrities get on the route. That is a big part of the day. They're recognised, they're cheered on, and you get some great reactions from the crowd. 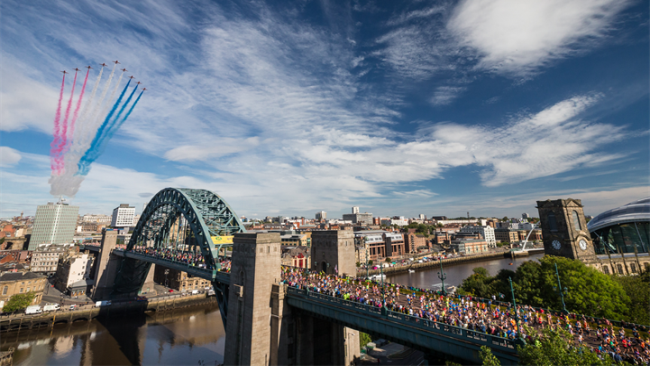 “I ran with Cheryl Baker from Buck's Fizz one year, and she couldn't believe the number of people that recognised her. She didn't have a clue that so many people would recognise her. It's good for the spectators too to see these celebrities.”

Ray has chaperoned a plethora of celebrities over the years, but none as many times as he has with BBC commentator Motson – and it was the popular broadcaster who left the biggest impression on the volunteer.

He said: “He's a good runner. I remember in 1997 he ran 1.40. For a guy of his age, his fitness levels were excellent. Some club athletes would be happy with that time.

“It was a very hot, humid day, otherwise he could have ran a couple of minutes quicker. That's probably the memory that sticks with me most about all of the runs I've done. He ran his heart out.”

But, as Ray explains, the event is not all about the celebrities and the elites, and with the Great North Run general ballot now open, he has challenged those who have never taken part in the event to give it a go.

He said: “It's about the people. You have the elite runners who are very important but you have those who are raising money for charity. Everybody has got a story to tell you about why they are running. It's an unbelievable event.

“I used to run to work in the 1970s and there was a guy in the office used to go mad at me, saying I was mad for doing all this running. ‘You'll never catch me running', he would say.

“If you're from the local area you have to do the Great North Run at least once.”