A very familiar face from North East England’s television screens is returning to his Suffolk roots to run in the inaugural Simplyhealth Great East Run on Sunday 24 September.

Ian Payne is from the Castle Hill area of Ipswich and moved to Newcastle upon Tyne 31 years ago to take a Sports Degree.

The former Westbourne High School pupil began what has become a very successful broadcasting career, by appearing on the TV quiz Blockbusters in 1985 – he now presents the award-winning ITV Tyne Tees news every night.

Now 49-years-old, Ian last ran a half marathon when he was 19 when he undertook the Ipswich Half Marathon and the Great North Run in Newcastle.

He aims to compelte both runs again before he turns 50, and to raise funds for the Sir Bobby Robson Foundation.

Ian said: “All this sounded great in my head when I decided to do it. Except 30 years ago I was a Sports Degree student and very fit. And now I’m not!

“I’m originally from this area and Sir Bobby was a huge hero of mine, both for what he achieved with Ipswich Town and then what he went on to do through his cancer charity.

“I’m really looking forward to my run around my home town and my parents, brothers, family and friends will all be cheering me on as I pass Sir Bobby’s statue!”

Ian recently met with Lady Elsie and Sir Bobby Robson Foundation Patron, Alan Shearer, to discuss his plans and share his hopes for the runs.

Lady Elsie says: “We wish Ian all the very best of luck. What a marvellous way to celebrate coming to the end of his 40s.

“Ian’s such a lovely and talented man. He’s done a great deal to support the work of our Foundation and we’re very grateful to him.

“I’m sure the Simplyhealth Great East Run will be a huge success and I hope all the runners taking part enjoy the day.” 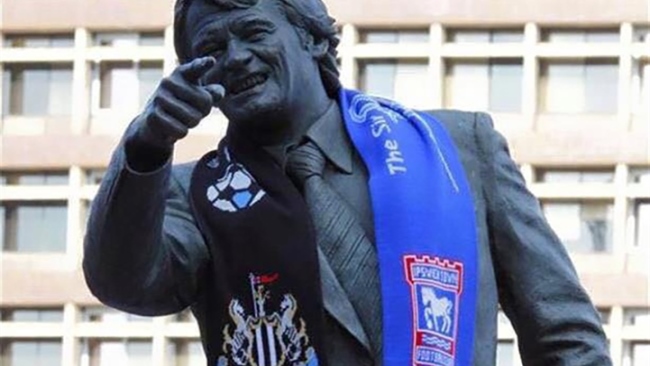 Sir Bobby Robson launched his Foundation in 2008 and it has gone on to raise over £11 million to find more effective ways to detect and treat cancer.

The work funded directly benefits cancer patients in the North East and Cumbria and plays a significant role in the international fight against the disease.

Working within the NHS, the Sir Bobby Robson Foundation does not employ professional fundraisers to proactively raise money and relies completely on third party, volunteer fundraisers and the incredible generosity of the general public.

3,000 runners will take on the Simplyhealth Great East Run this Sunday, which features a scenic course that starts and finishes in the town centre, passing under the iconic Orwell Bridge twice.